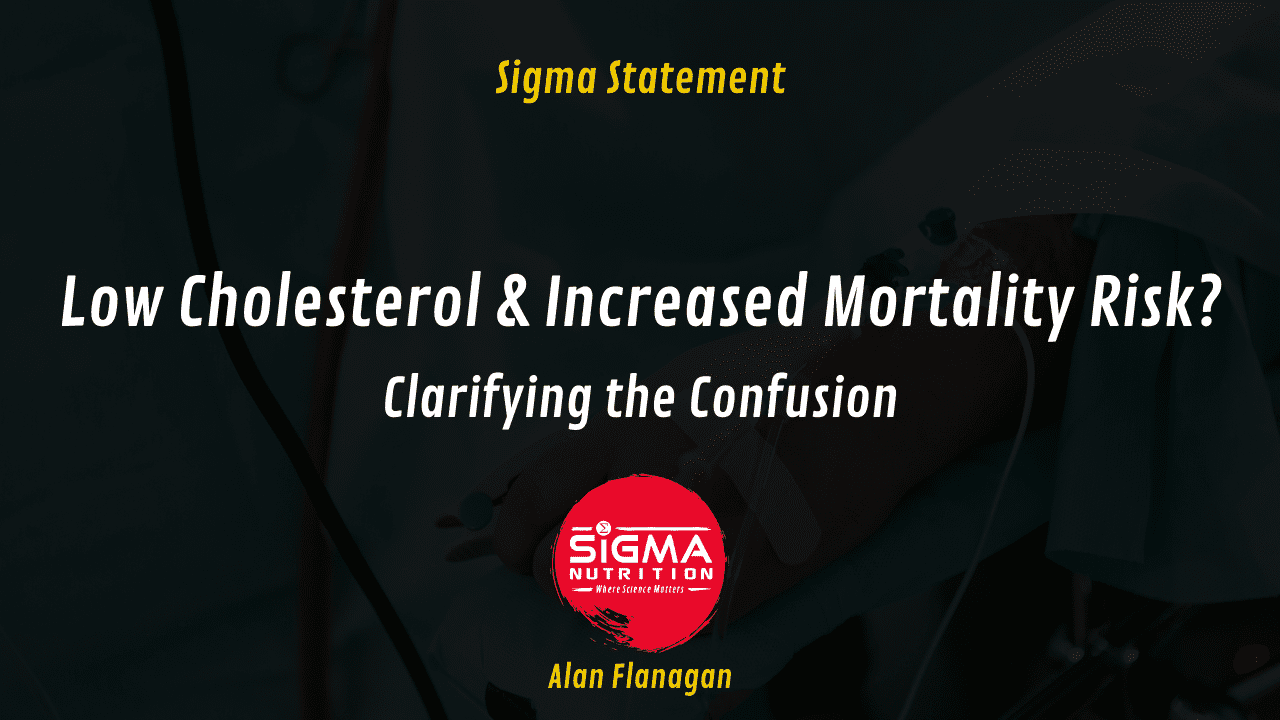 One of the most common angles of argument from Cholesterol Denialism is that low levels of low-density lipoprotein cholesterol (LDL-C) increases risk for mortality from other, non-cardiovascular diseases.

This is commonly heard in relation to all-cause mortality and cancer, while also suggesting that there is little benefit to targeting lower LDL-C in the elderly in order to prevent cardiovascular disease (CVD).

Video above: Aseem Malhotra claims about LDL-C & Mortality Risk
Originally from this interview on May 26 2021

Especially interesting to look at age 60-74 with high cholesterol and low BP/non-smoking vs those with low cholesterol. pic.twitter.com/Z9m60EUXow

Like many Quackery arguments, there is often a sliver of evidence on which to serve a feast of fantasy. And like such arguments, reconciling seemingly discrepant data against the totality of evidence can bring us closer to an approximate truth of that issue. In this Sigma Statement, we examine the supposed "Cholesterol Paradox."

The theory of a "cholesterol paradox" posits that low levels of LDL-C is associated with worse non-CVD health outcomes in the elderly, specifically in populations aged over 60 years of age.

The apparent "paradox" stretches back to observational research in the 1980's which suggested a link with low LDL-C levels and subsequent cancer risk.

A 2016 systematic review by prominent Cholesterol Denialists purported to show an inverse relationship between higher LDL-C and all-cause mortality, i.e., higher LDL-C lowered risk of death from any cause. 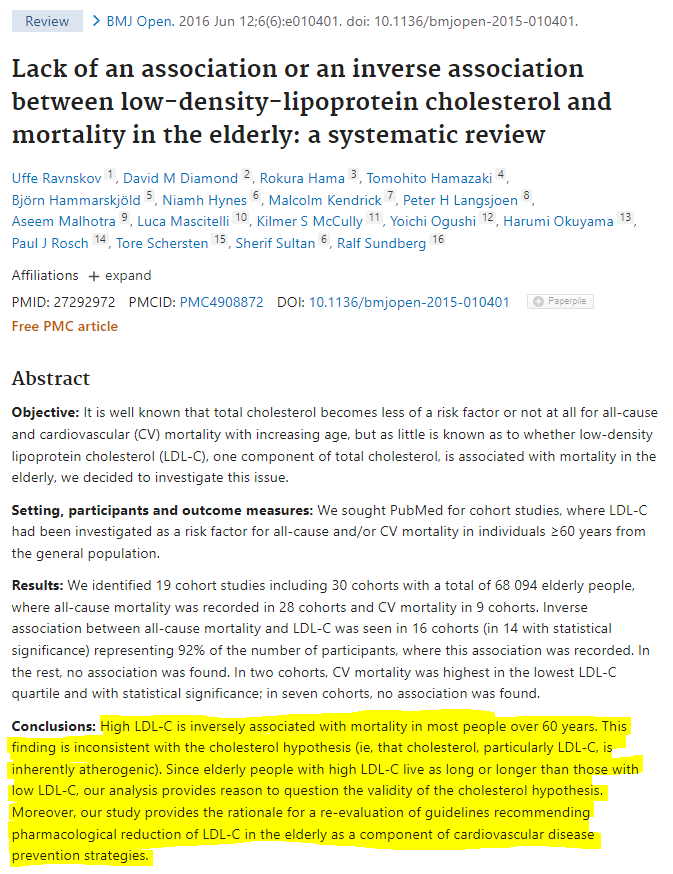 To reconcile this apparent "paradox", there are several lines of thinking we can consider:

One aspect of the argument in relation to low LDL-C and increased non-CVD mortality risk is that deliberately lowering LDL-C poses a risk for developing cancer or dying from any other cause.

This is then used to argue against deliberately intervening to lower LDL-C in order to reduce CVD risk. Essentially, this is the basis for the "avoid statins because low LDL is bad" advice.

In this regard, it is important to distinguish between:

Let's first deal with the evidence for deliberate pharmacological lowering of LDL-C.

Armitage et al., for the Cholesterol Treatment Trialists' Collaboration (CTTC), conducted a meta-analysis of 28 statin randomised controlled trials (RCTs) to examine safety and efficacy in relation to both CVD and non-CVD mortality outcomes in the elderly. The established benefit to lowering CVD risk was clearly evident. However, in addition there was no increased risk of any non-CVD cause of death, irrespective of age group, based on different LDL-C lowering. Meaning that for every 1mmol/L (38.6mg/dL) that LDL-C was lowered, there no difference in non-CVD mortality risk.

If we consider cancer specifically, as this is commonly a point raised by those discussing the "paradox", we see a similar story; i.e. there was no risk observed per 1mmol/L reduction in LDL-C for either cancer incidence or death from cancer. Then if we factor in both CVD and non-CVD mortality together, the risk of all-cause mortality was 9% lower (RR 0.91, 95% CI 0.88 - 0.93) in patients treated with statins.

Thus, the evidence does not support that deliberate lowering of LDL-C using statins increases risk of death from any cause or cancer. 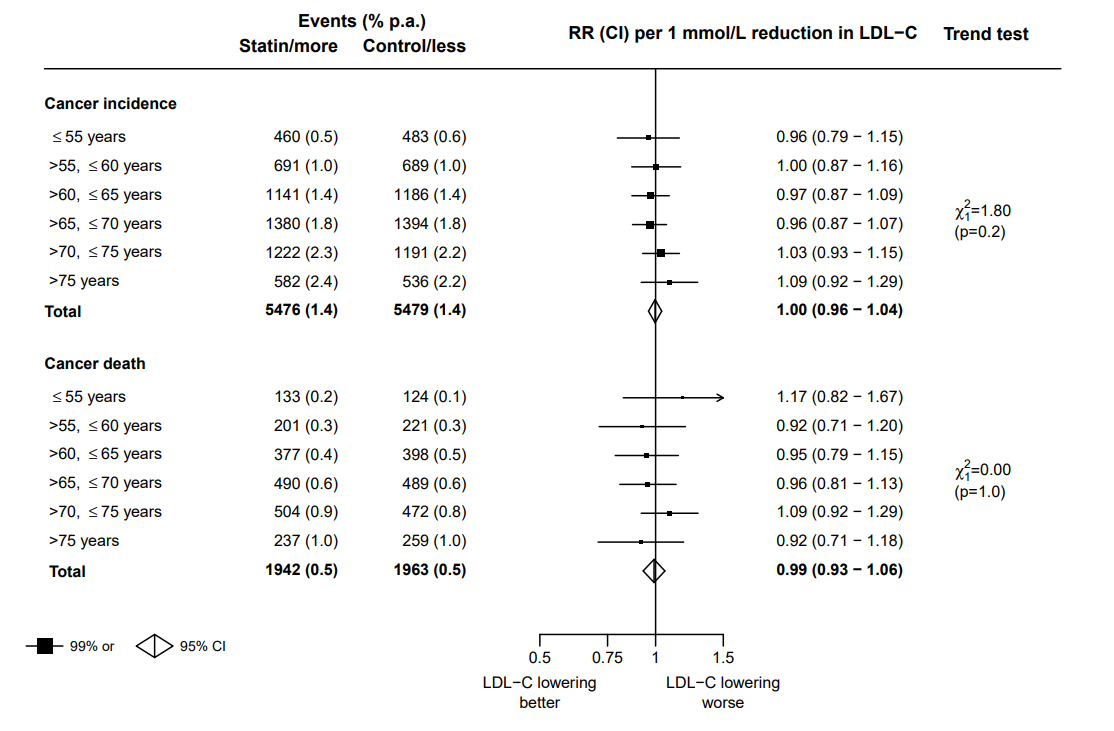 There is also evidence from non-statin pharmacological interventions, including:

Sabatine et al. conducted a meta-analysis of non-statin randomized-controlled trials (RCTs), and compared these data to the evidence from the CTTC meta-analysis discussed above. The most important characteristic of this analysis was that it focused on patients with already low LDL-C levels from statin therapy, and specifically investigated whether further lowering to very low LDL-C levels was associated with any adverse effect on death from other causes.

In these trials, the control groups were also treated with statins and all control groups had baseline LDL-C levels of less than 1.8 mmol/L (70 mg/dL). Further lowering of LDL-C (which went as low as 0.5 mmol/L, or 19 mg/dL, with PCSK9-inhibitors in the FOURIER trial) was not associated with risk of cancer in participants treated with other non-statin pharmacological interventions. Nor was there any association with serious adverse events, myalgia and/or myositis, new-onset diabetes, or hemorrhagic stroke.

The important point in relation to these different pharmacological interventions for lowering LDL-C is that they all lower LDL-C through different mechanisms, namely:

Thus, independent of the mechanism of lowering LDL-C, there is no observable safety concerns in relation to risk of non-CVD incidence or mortality.

However, it should be noted that there may still be some risk evident in the research. A meta-analysis of studies which compared levels of LDL-C in patients treated with statins to levels in patients in the control group (i.e., not treated with statins). This meta-analyis found similar risk for cancer, whether treated with statins or not, at any level of LDL-C. However, this analysis also indicated that both groups had a higher risk for cancer with lower LDL-C levels. Nevertheless, the similar rates in the intervention and control group are critical, as it corroborates the above research demonstrating that lowering LDL-C through statin intervention is not the cause of increased cancer risk. For example, in the CTTC meta-analysis the rate of cancer diagnosis was identical (6.4%) in both intervention and control groups.

The overwhelming evidence demonstrates that deliberate pharmacological lowering of LDL-C does not increase cancer risk or all-cause mortality risk.

However, despite no difference between pharmacological treatment and control group risk of cancer, there remains in the data some evidence of a putative association between low measured LDL-C and cancer risk. What could explain this? This is where the concept of endogenously lower LDL-C requires examination.

To consider endogenously lower LDL-C levels, we need to come back to a couple of the questions posited in the introduction, specifically:

Bear in mind that the associations between low LDL-C and mortality risk are primarily observed in the over 60's age group. However, we know that exposure to LDL-C influences health and disease risk from the second decade of life. This is important because claims from studies like the 2016 BMJ Open paper, which suggested high LDL-C lowered mortality risk in the over 60's age group, do not account for LDL-C exposure over the course of the lifespan. Because many people will have died already, this type of analysis excludes the effects of cumulative exposure; i.e. this is an error of survivorship bias.

With Mendelian Randomisation (MR) studies, it is possible to account for this by examining lifelong exposure to different levels of LDL-C. Meaning, we can look specifcally at people who have different lifelong levels of LDL-C, based on genetics. Postmus et al. conducted an MR study using data from three cohorts, by calculating genetic scores for genes related to LDL-C levels, across age groups (see figure below). The combined analysis of the three studies showed:

The above figure from Postmus et al. illustrates the associations between LDL-C and all-cause mortality across six different age brackets according to genetic predisposition to:

Consistent with the totality of evidence in support of risk related to LDL-C as a cumulative exposure, higher compared to lower LDL-C was associated with increased risk.

Thus, if lifelong exposure to naturally (i.e., genetically) lower LDL-C is associated with lower all-cause mortality risk at every age group, could there be other factors which result in blood cholesterol levels decreasing as a natural response to other physiological processes in the body?

One explanation for the relationship between low LDL-C and cancer is what Rose and Shipley termed the “unsuspected sickness phenomenon”. This is where the metabolic consequences of an underlying, undiagnosed disease (e.g. cancer) causes a drop in LDL-C levels.

In a case-control study of the Framingham Heart Study Offspring Cohort, LDL-C values were lower in participants with cancer compared to matched controls at each point of assessment over an average of 18.7 years prior to diagnosis, indicating that low LDL-C levels predate diagnosis over periods of years.

One way to tease this out is to exclude the first few years of follow-up from the study (i.e. conduct a sensitivity analysis). When this approach is used, if the association between an exposure and outcome is weakened, it indicates that potential confounders may have already been present at the start of the study, but were latent or undetected. Such confounders may have influenced the association. So by eliminating the early follow-up period data, one can prevent such confounders (like undiagnosed/early-stage cancer) from erroneously influecing the association. When one takes studies that show a relationship between low LDL-C levels and cancer risk, and eliminate the early follow-up period, the majority of the association is abolished.

Thus, the apparent relationship between low cholesterol levels and increased mortality risk is primarily one of reverse causality. Therefore it is underlying metabolic dysfunction related to latent disease which explains the risk of death, not the low blood cholesterol levels. This is confirmed by the evidence that naturally lower LDL-C levels are associated with lower all-cause mortality risk across the lifespan in genetic studies. And it is corroborated by the lack of evidence from deliberate, pharmacological lowering of LDL-C of any increased cancer or all-cause mortality risk compared to untreated patients. Which brings us to a final, but important, consideration.

LDL-C as a Cumulative Exposure: Relevance for Risk Reduction in the Elderly

It is important to consider this concept of a cumulative exposure to LDL-C over time as it relates to deliberate intervention to lower LDL-C in the elderly. By the 6th and 7th decades of life, atherosclerosis may already be advanced. Thus, the benefit to lower LDL-C relates to the absolute magnitude of exposure to lower LDL-C , i.e., both the duration of lower exposure and the actual levels of LDL-C achieved. 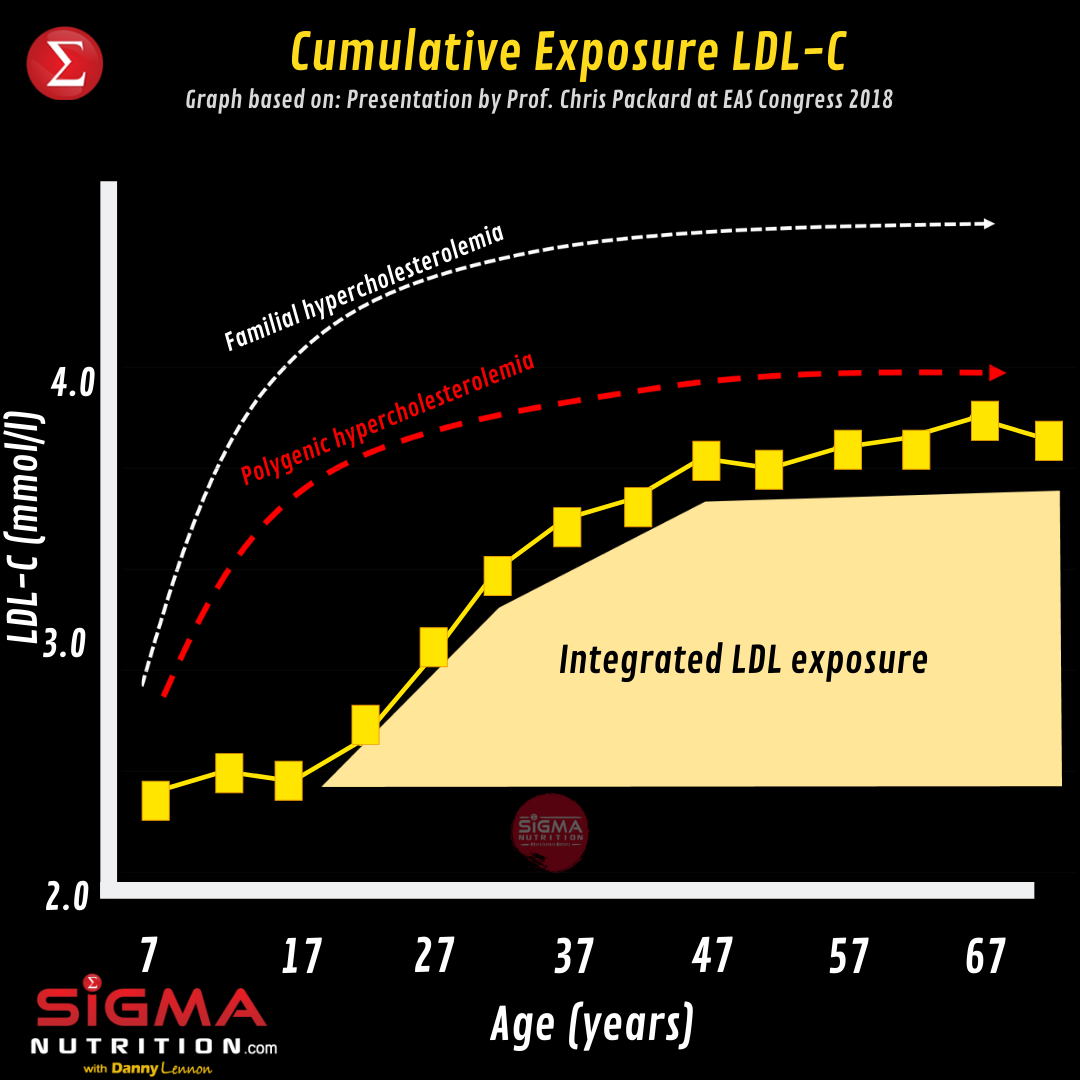 These data are observed prospectively in cohort studies over the long-term. When scaling out follow-up periods of up to 40 years, low baseline cholesterol levels were associated with 25% lower all-cause mortality risk, in men aged 30-45 years old at baseline. When follow-up was extended to 46 years, these associations persisted: men with the lowest baseline cholesterol levels had the longest survival time, i.e., longevity. However, given that the same voices who argue that 'lower cholesterol increases all-cause mortality' will cite observational studies which support their claim, but then dismiss all epidemiology when it does not, let us thus turn our focus to genetic studies and randomised controlled trials to illustrate this point. 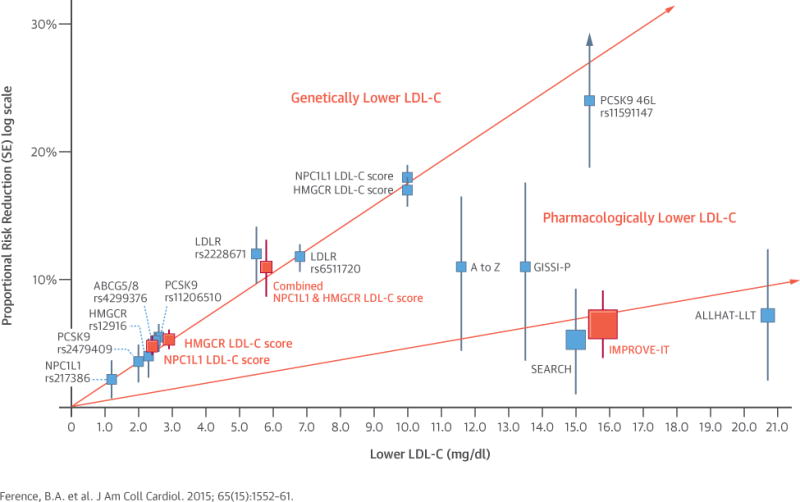 Elderly patients are complex due to multiple potential factors:

These factors together add up to a population which is high-risk prior to any intervention to lower LDL-C. Proportional reductions in risk with statin intervention in the elderly do decrease with age, however, this trend is not significant.

An important point to grasp here is that relative risk reduction to lowering LDL-C is independent of baseline LDL-C levels, and independent of other risk factors like hypertension treatment, and smoking. The relative risk of CVD is generally constant over a lifespan when other risk factors are held constant, except age. Therefore (reiterating the point above) the absolute risk is higher in patients over 75 years old.

If relative risk is constant, and absolute risk is higher in the over 75 years age group, there should still be a net benefit to intervening and lowering LDL-C with statin treatment in this age bracket, even though the magnitude of risk reduction may be smaller. This is precisely what the data shows.

In the figure below from Collins et al., you can see that: 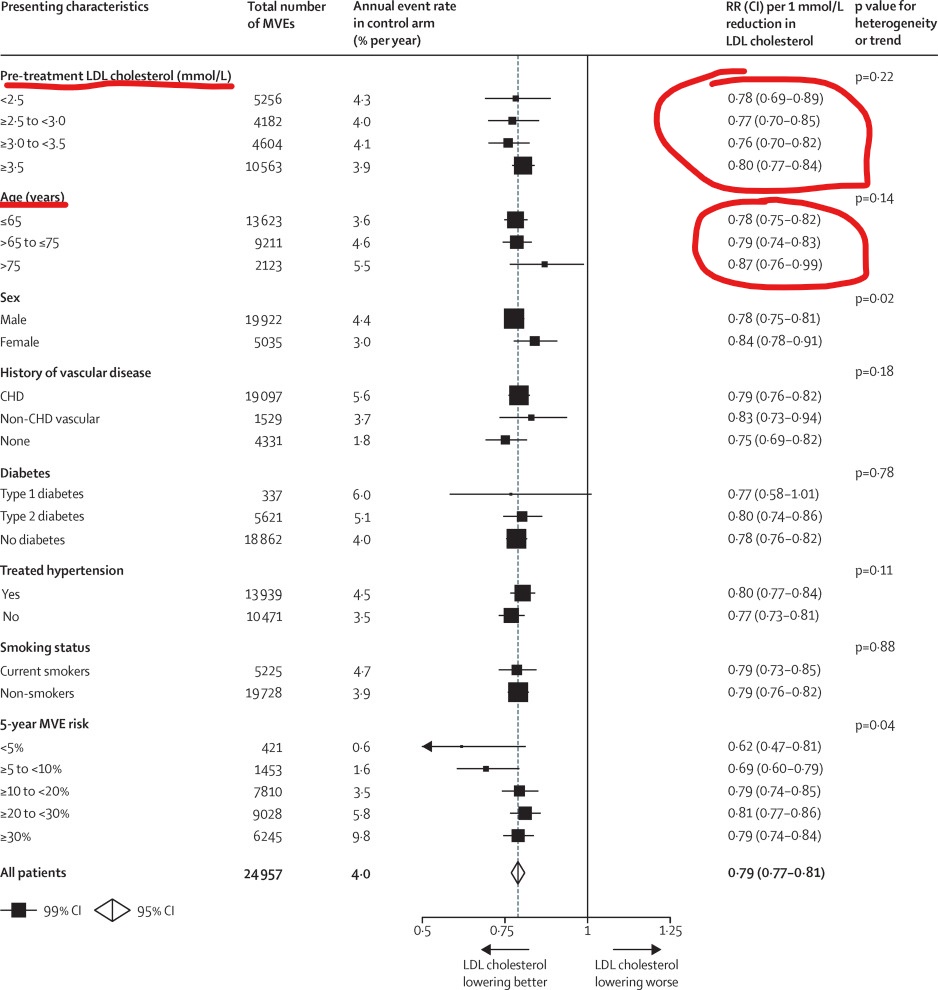 Overall, these data are consistent with the competing mortality risk which makes assessments of risk:benefit more challenging in the elderly.

Nonetheless, the proportional benefit does appear to persist once excluding trials of heart failure or renal disease: in a meta-analysis of 14,483 participants older than 75 years and with existing CVD, statin treatment was associated with a 15% (HR 0.85, 95% CI 0.73–0.98) reduced rate of major vascular events. Although the benefit in primary prevention in patients over 75 years is less clear, the data supports a proportional risk lowering by intervening to lower LDL-C in secondary prevention and in patients with existing CVD.