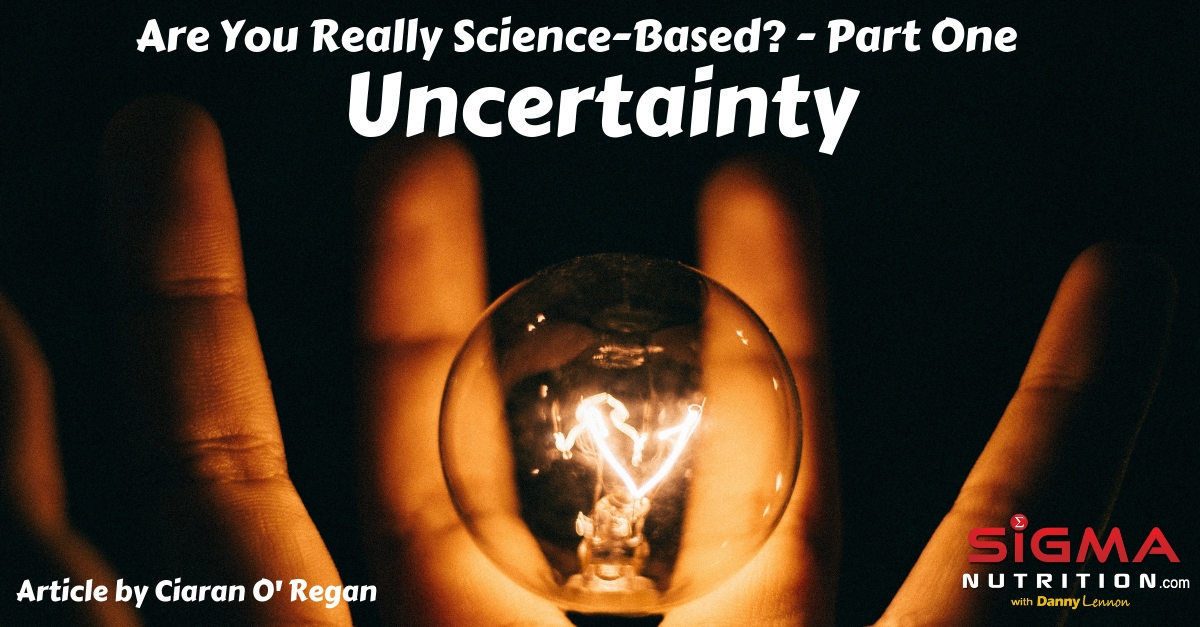 There are many ways individuals classify themselves based on their views. Often people attach an identity to their views. Maybe they claim to be a “clean eater”. Or a “flexible dieter”. Or maybe it’s as simple as “keto” or “vegan”. Regardless, these classifications are used to tell us the person holds a certain set of views/beliefs. But how attached to them they are may indicate something more important… what type of thinker they are.

Consider a hypothetical scenario in which you find yourself in a debate with three people with deeply held nutrition (or other) views. And not only are these views different to your own, but the exact opposite of them. Before potentially finding oneself in the kind of heated exchange that typically races to a sweaty stalemate, consider simply asking them what would it take to get them to change their mind about their views?

Now let’s reverse the question: what would it take YOU to change YOUR views?

Furthermore, how did you actually end up with those views in the first place? Are you certain that your views are correct? (certain is defined as: “having or showing complete conviction about something.”) Are you intellectually honest? If so, do you think it is possible to actually be “certain”?

Now, you may be wondering what does all this have to do with science? Well I would argue that the essence of science lies in the concept of certainty itself.

“The scientist has a lot of experience with ignorance and doubt and uncertainty, and his experience is of very great importance, I think. When a scientist doesn’t know the answer to a problem, he is ignorant. When he has a hunch as to what the result is, he is uncertain. And when he is pretty damn sure of what the result is going to be, he is still in some doubt. We have found it of paramount importance that in order to progress, we must recognize our ignorance and leave room for doubt. Scientific knowledge is a body of statements of varying degrees of certainty — some most unsure, some nearly sure, but none absolutely certain. Now, we scientists are used to this, and we take it for granted that it is perfectly consistent to be unsure, that it is possible to live and not know. But I don’t know whether everyone realizes this is true.”

“…science is more than a body of knowledge. It’s a way of thinking. A way of skeptically interrogating the universe with a fine understanding of human fallibility.”

True scientific thinking necessitates, at minimum, the acknowledgement that uncertainty actually exists, and at best the development of a comfort with it. This sense of comfort with the uncertain appears to go against our seemingly inherent inclinations toward its inverse. This is likely one of the main reasons as to why thinking like a scientist is such a difficult thing for us as individuals to actually do. It’s worth noting that scientific thinking can be applied to any field or aspect in life. And can be a huge advantage in our lives once cultivated.

You see, as Feynman alludes to above, science never proves anything with absolute certainty; it just gets us to lower and lower levels of uncertainty around a view. As such, paradoxically, the only certainty in science is that we should strive to remain uncertain in the face of the vast complexity generated by a potentially infinite Universe. The systemized intellectual honesty and openness to changing our views in light of evidence that true scientific thinking provides is paramount in order to avoid the dogmatic thinking that stifles progress. In his 1841 essay “Self Reliance”, Ralph Waldo Emerson suggested the same when he said:

“A foolish consistency is the hobgoblin of little minds, adored by little statesmen and philosophers and divines. With consistency a great soul has simply nothing to do. He may as well concern himself with his shadow on the wall. Speak what you think now in hard words, and to- morrow speak what to-morrow thinks in hard words again, though it contradict every thing you said to-day.”

True scientific thinking involves not identifying as your views, but instead identifying as someone that has views. The difference between ‘as’ and ‘has’ may seem initially subtle, but when you break it down the implications are quite enormous.

Science is not about your views; science is about how you come to your views. In other words, how you think is far more important than what you think. With scientific thinking, you are essentially humbly acknowledging that you are unable to know everything there is to know whilst still striving to make the best decisions possible using available evidence. And given the inherent uncertainty that manifests as a result of the complexity of the Universe; you realize all you are ever doing is making best guess decisions. You are not chaining yourself to set views but instead are embracing the chaos of the infinite unknown with open arms because you have a way of thinking – Science – that offers a decision making process to navigate its uncertainty.

Scientific Thinking Outside of the Sciences

Let’s take an example from human history to illustrate what happens when a certainty mindset (i.e. non-scientific thinking) manifests in the wider world. Let’s go back to the first half of the 20th Century. This was quite possibly the most turbulent time to ever have been alive. There were far too many people certain that their race/religion/party/nation was superior to others. So certain that they were willing to kill on an industrial scale beacuse of it. William Butler Yeats (1865-1939) lived through the beginnings of that century and could see what was happening around the world. In his 1919 politically orientated poem The Second Coming he derided those overflowing with belief or victimhood and tipped his hat to those comfortable with uncertainty when he said:

“The best lack all conviction, while the worst are full of passionate intensity.”

In part 2 of this series we will discuss why the only certainty in science should be to remain uncertain.

Ciaran is a Sport Scientist based in Cork, Ireland. Academically, he received a First Class B.Sc. in Sport and Exercise Sciences from the University of Limerick in 2012. He is also a published researcher who will be embarking upon a Professional Doctorate in 2019 orientated around uncertainty based training planning. Athletically, he was a long-term competitor in combatives with Boxing and K1 Kickboxing being his primary interests. Hobby wise, he claims to enjoy studying psychology and philosophy “way above his intellectual pay grade.” Professionally, he coaches in-person with sports teams and individuals as coaching online here at Sigma Nutrition (apply here for coaching).