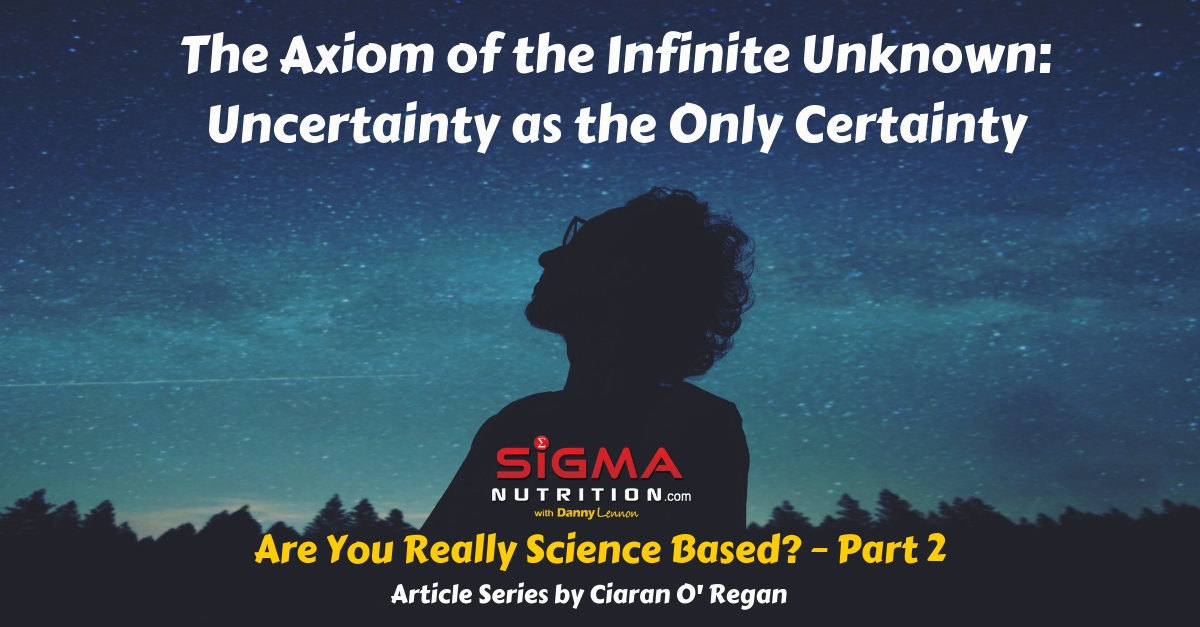 NB: The aim of this article is to illustrate WHY one should paradoxically maintain “uncertainty as ones only certainty” as a Scientific Thinker. You can read Part 1 of this series: “Uncertainty” in order to acquire the some foundational understanding of the topic that will provide a solid foundation for this article below.

The previous article in this series (read here) began with a hypothetical scenario in which one was to find oneself having a discussion with 3 people. Each of those people had views that were radically different to one’s own. Each individual was asked “what would it take for you to change your mind about your views?” The resulting responses allowed us to classify each into individual as one of 3 distinct “thinker types”:

The response given by the ST was as follows: “well, if I was presented with sufficient evidence then I would be willing to genuinely entertain the possibility that I am currently incorrect in my views and will consider updating my opinions about how accurately my ideas reflect our known reality”.

This response is that of a ST because they maintained enough skepticism and doubt of their own views to be willing to update them in light of evidence; i.e. they remained uncertain.

A ST holds strong views based on the probability of those views accurately reflecting reality. They do not, however, hold on to those views too tightly; they are aware of their inescapable ignorance as a fallible, limited, and irrational finite ape. This process of being grounded in doubt is pivotal to the truth-seeking endeavor that Science represents. The French philosopher Peter Abelard alluded to this concept when he said:

“…doubt is the road to inquiry, and by inquiring we perceive the truth.”

Admittedly it can initially feel uncomfortable to be perpetually uncertain or in doubt of one’s views. But to not maintain uncertainty or doubt is to become shackled as a thinker as I described in Part 1. As Voltaire said:

“Doubt is not a pleasant condition, but certainty is absurd.”

But why one may still find oneself asking is certainty absurd? What makes the Believer Thinker (BT) and the Victim Thinker (VT) so ridiculous?

If we imagine that one finds oneself on a very long journey in a car with the three “Thinkers” described previously.

Perhaps, after the initial question, one receives a textbook insult from the VT in an attempt to avoid discourse. As a result, a period of some tense silence ensues. Perhaps the BT breaks the silence by angrily asking the ST why they are willing to change their views when they are so obviously correct?

The ST responds by positing a thought experiment:

“Imagine that you could freeze time and space and that doing so prevented any new information from being generated anywhere by anyone or anything.”

“Now imagine that you had access to all the humanly available information in this particular area To help conceptualize this, this includes all the existing:

“Now imagine you could somehow travel anywhere, unfreeze any person you would like, and then interview them about your topic to pick their brain.”

“That is, having ABSOLUTE certainty about the ABSOLUTE truth regarding the optimal way to operate in your field, that will be INFALLIBLE with no modifications necessary and with no room to improve?”

To compound the near impossibility of absolute certainty, this thought experiment only references the existing knowledge in a given field.

Since you can’t have all the knowledge (known, unknown, or even unknowable) there has ever been in the past, currently exists, or will ever exist in the future, you can’t be certain of anything but the fact that you should remain uncertain.

Knowledge as the Limiter in Opinion Generation

So, what is the major takeaway here?

The late futurist and polymath Jacque Fresco once described creativity as the combination of known parts in an unknown way. I wish to extend this viewpoint of creativity to the endeavor of generating an opinion.

An individual human can only think from within its individual frame of reference using the known parts (knowledge) it already has in order to interpret the world. Apart from the innate tendencies a human has which are evolutionarily programmed, the knowledge used for the interpretation of the world is gained through experiences. Therefore the more knowledge you have the better you can think and the more accurate your opinions are likely to be as a reflection of reality.

The lack of awareness a human has of its ignorance can lead to problems in opinion generation. This is because the less knowledge one has, the less aware one may be of their ignorance. Essentially, they don’t know enough to realize how little they actually know. In his book “Thinking, Fast and Slow” Daniel Kahneman brilliantly alluded to this concept when he said:

“You build the best possible story from the information available to you, and if it is a good story, you believe it. Paradoxically, it is easier to construct a coherent story when you know little, when there are fewer pieces to fit into the puzzle. Our comforting conviction that the world makes sense rests on a secure foundation: our almost unlimited ability to ignore our ignorance.”

To paraphrase Donald Rumsfeld, there are things humans know we know, things we know we don’t know, and things we don’t even know that we don’t even know about. To carry this a step forward, there may also be knowledge that even if we knew we didn’t know, we may not be able to understand even if we had access to it as our ape brains may simply be too limited to sufficiently navigate its complexity.

As such, when you fully come to terms with the fact that the complex and infinite nature of the Universe is too much for any one person to comprehend, you are conceding that you yourself are unable to know everything. This is what I call The Axiom of the Infinite Unknown (I will use the acronym TAIU from now on since the full wording is a serious mouthful.)

The Axiom of the Infinite Unknown (TAIU)

While this concept may have other names in the philosophical space I am thus far unaware of, TAIU is a label I came up with as:

An axiom (as per Wikipedia) is:

“a statement that is taken to be true, to serve as a premise or starting point for further reasoning or arguments.”

And, since science is a human endeavor pertaining to the study of the Universe itself, the fundamental axiom for a scientific thinker is therefore one that needs to highlight our perpetual ignorance as the ground floor concept required in order to have the necessary systemized humility to function as a true scientist.

The Axiom of the Infinite Unknown (TAIU) refers to the premise that a single human is limited and finite whereas the knowledge contained within the Universe is complex and infinite. Accepting TAIU means that one acknowledges the impossibility of knowing all knowledge there was to know, is to know, or will ever exist and therefore will strive to maintain “uncertainty as ones only certainty.”

The Mathematician and Historian Jacob Bronowski described this perpetually insatiable quest for truth on which science is based in a beautiful manner when he said:

“I define science as the organization of our knowledge in such a way that it commands more of the hidden potential in nature.”

Doubting Doubt and Uncertain about Uncertainty

If you have made it this far, it may have occurred to you that there is a quite the paradox in accepting TAIU and maintaining “uncertainty as ones only certainty” or in having doubt itself as the only thing one is not to doubt.

In his book “The Black Swan” N.N. Taleb addresses this question with a superb anecdote about the father of modern science Sir Karl Popper on being asked whether one “could falsify falsification”? Or in other words, whether one could be uncertain about uncertainty. According to Taleb, the response given by Popper was that “he threw students out of his lectures for asking far more intelligent questions than that one.”

A potential means of wrapping up the key concepts from Parts 1 and 2 of this series in a way that leads into Part 3 is as follows:

Ciaran is a Sport Scientist based in Cork, Ireland. Academically, he received a First Class B.Sc. in Sport and Exercise Sciences from the University of Limerick in 2012. He is also a published researcher who will be embarking upon a Professional Doctorate in 2019 orientated around uncertainty based training planning. Athletically, he was a long-term competitor in combatives with Boxing and K1 Kickboxing being his primary interests. Hobby wise, he claims to enjoy studying psychology and philosophy “way above his intellectual pay grade.” Professionally, he coaches in-person with sports teams and individuals as coaching online here at Sigma Nutrition (apply here for coaching).