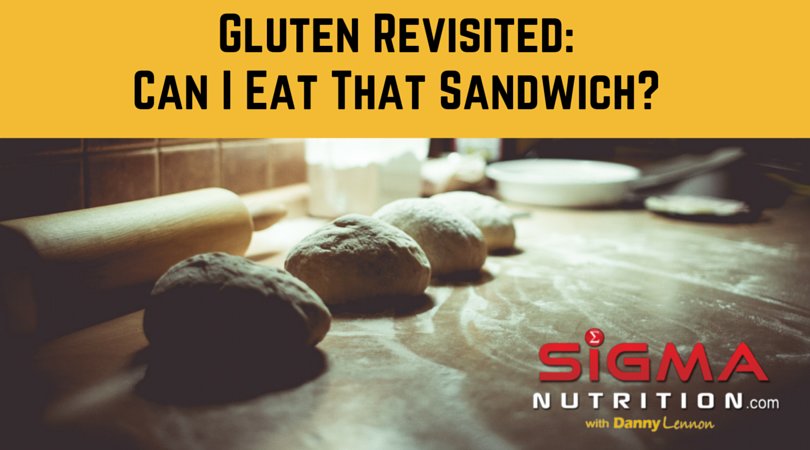 Unfortunately, the rate of dogmatic fantasy tales you can read online vastly out-weighs the evidence. And it makes things a nightmare for most people to navigate through.

Some of these stories can be very convincing. I have even been guilty of giving some of them too much credence in years gone by.

And when it comes to the impact of gluten on human health, things are no different.

There are so many questions that regularly are asked about gluten. Questions like:

But really, all the questions can be distilled down into one simple question that you and I want definitively answered…

“Can I eat that sandwich or not?!” 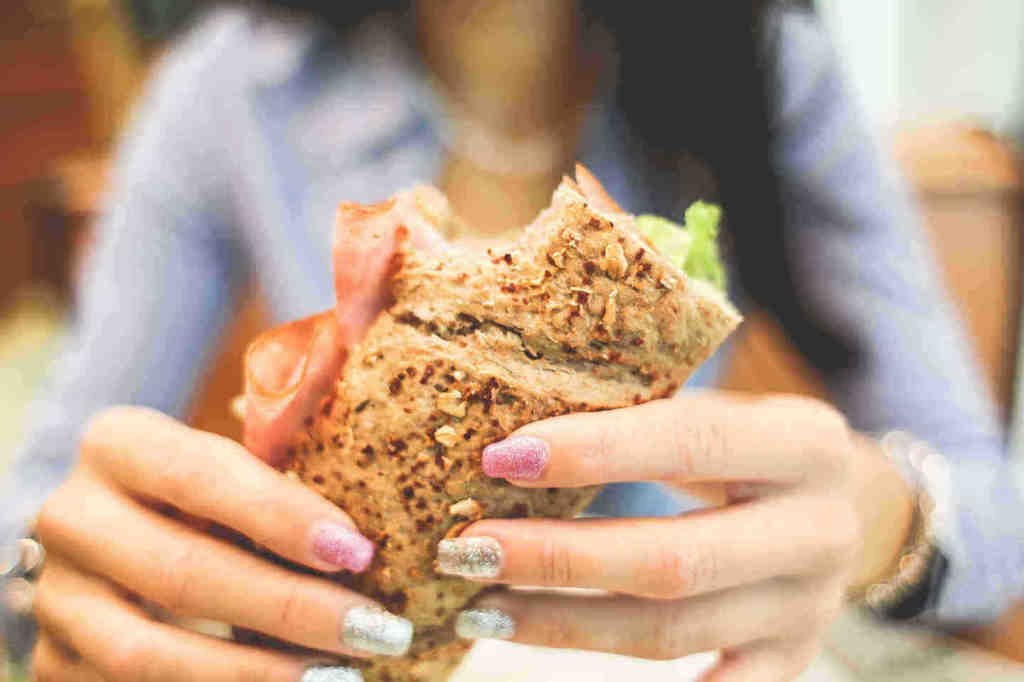 While I may not be able to give you as an individual an answer as to whether you should eat the sandwich or not, I’ll try to address what we can actually conclude from scientific literature.

What Do We Know?

We know a lot about gluten; what it is, what happens when we eat it, how it affects coeliac disease patients, etc.  From observational data, cellular interactions, molecular research, human controlled trials. We have a lot of research on gluten.

We know those diagnosed with coeliac disease should go on a 100% gluten-free diet for life.

We know there seems to be an increased prevalence of coeliac disease amongst those with an autoimmune disorder like type 1 diabetes or Hashimoto’s thyroiditis.

But what we don’t know is to what extent gluten is a problem for people who don’t have these clinical issues.

We are just not that sure when it comes to talking about non-coeliacs who seem to be “gluten sensitive”.

Who is “Gluten Sensitive”?

Those who have an adverse reaction to gluten can be broken into 3 primary categories:

Autoimmune and allergic reactions to gluten are well studied and understood. But the more recently defined concept of non-coeliac gluten sensitivity (NCGS) is where all the debate, confusion and controversy resides. 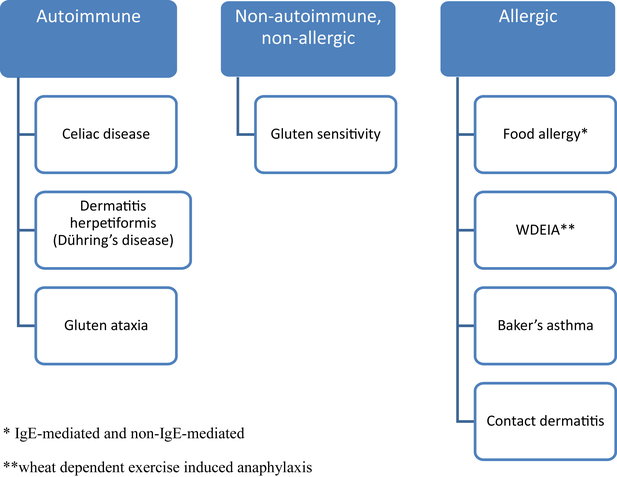 NCGS can be classified as cases of a reaction to ingestion of gluten-containing grains in which both allergic and autoimmune mechanisms have been ruled out.

So it’s a diagnosis by exclusion criteria. We have someone who reports a relief of symptoms when on a gluten-free diet and a return of symptoms after consuming gluten-containing foods. But they have neither coeliac disease or wheat allergy.

The problem is that the diagnosis is not one based on biomarkers. There is no concrete (validated) test you can get from your doctor to determine if you have NCGS.

Note that in the classification of this disorder, ‘sensitivity’ is used rather than ‘intolerance’.

An intolerance usually refers to not being able to handle a certain nutrient in digestion. For example, in cases of lactose intolerance, the sufferer lacks the enzyme lactase to break down lactose. So gastrointestinal distress occurs due to the fermentation in the gut of the undigested lactose.

However, with a ‘sensitivity’ symptoms can manifest outside of the intestinal tract as well as inside.  So it seems that symptoms of gluten sensitivity can manifest elsewhere in susceptible individuals.

There is a genetic component to this story of course. 97% of those with coeliac disease have genes encoding for the human leukocyte antigen  DQ2 or DQ8. And some research has shown that about 50% of those with NCGS with have this genetic pre-disposition.

Are Gluten-Free Diets a Fad?

Whilst being a marketers-dream, the barrage of over-priced products like gluten-free cookies, cakes and pizza has made a gluten-free diet be the source of much (probably deserved) ridicule.

We also have a lot of people stuck in the “gluten-is-the-cause-of-everything” mentality, as the South Park guys recognise. And so it’s understandable why many opponents to the NCGS concept shake their head in disbelief at even the faintest murmuring of “I can’t handle gluten”.


Unfortunately, I think the gluten-free fad aspect to all this is preventing some people from open-mindedly looking at the reams of research now available on NCGS that shows us that gluten is a concern for more people than diagnosed coeliacs.

I really think that this fad aspect of gluten-free diets and the absolutism of those who push this agenda for everyone, is one of the primary players in why there is still some skepticism towards NCGS in the wider scientific community.

I’d urge the scientific community as a whole to ignore what is being seen in supermarkets and promoted on internet forums. Instead we should recognise that there is probably something to this NCGS issue, at least a lot more than the “if you don’t have Coeliac disease you’re fine” brigade would have you believe.

Also, on the topic of gluten-free diets, there is an important distinction to make:

Is It Likely I Have NCGS?

Because of the lack of consensus on the issue, and the ever-evolving status of the research in this area, it’s hard to give a solid answer to how likely someone is to have a sensitivity to gluten.

When we look at peer-reviewed scientific literature, prevalence has been suggested to be anywhere between 0.6-6%.

So a lot lower than the current trends in gluten-free market sales would suggest.

But even at those prevalence rates that will mean a number of people reading this will have an issue with gluten. But if symptoms don’t always manifest immediately and are quite generic (i.e. with “fatigue” for example, how do you know what’s causing it?) then how do you know if you have NCGS or not?

“Isn’t there just a test I can get done?” you might ask.

Currently there are no biomarkers for NCGS, hence why there’s such dispute over the legitimacy of the condition I suppose.

Some labs have developed testing (e.g. EnteroLab, which I think tests for fecal antigliadin IgA antibodies). But these tests are unverified and not accepted in current medical practice.

Additionally, some research has indicated that half of gluten sensitivity patients test negative for antigliadin-IgA and antigliadin-IgG antibodies anyway.

We’re going to trace what happens when we consume gluten. But first let’s highlight a few things that will put this all into context, starting with the gut.

There are ‘tight junctions’ between the cells of our gut lining that allow us to screen and choose which particles we let in from the environment into our bloodstream. We want to let through beneficial molecules (e.g. nutrients) and keep out harmful ones (e.g. pathogenic bacteria).

Think of these tight junctions as shoe laces that can open and close, depending on what we want to let in or keep out. 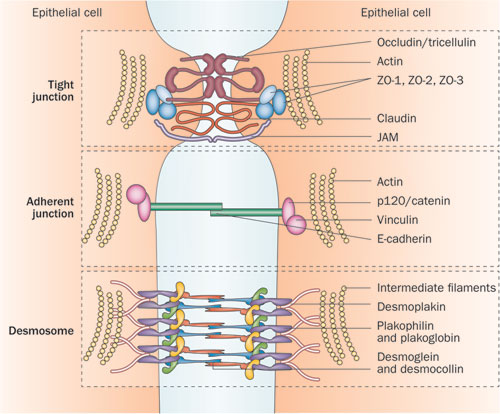 One thing we know from research is that even in people without an autoimmune/allergic reaction to gluten, consumption of gluten will trigger the release of a protein called zonulin.

The reason this is important is because zonulin increases intestinal permeability. In other words, there is an opening of the gap between the cells of the gut lining. It causes those shoe laces to remain open.

EVERYONE who consumes gluten will experience an increase in intestinal permeability. Or to go by the more slang term you may have heard, “leaky gut”.

Proof that we all should avoid gluten? Not so fast!

Usually when we eat proteins we digest them by breaking them down into amino acids, which can then pass through the gut into the bloodstream. Intact proteins or large polypeptides (chains of joined amino acids) cannot do this.

But no human can digest gluten.

And so as gluten is an indigestible protein it should not be able to pass through the cells of our gut lining (more accurately, we’re referring to one of the gluten proteins, gliadin, here. Gluten is in fact a class of two main proteins: gliadin and glutenin).

However, because we get the release of zonulin, which in turns opens the shoe laces (tight junctions), the intact gluten proteins are able to slip through the gut lining into the bloodstream.

These protein fragments are then treated by our immune system in the same way they would with “invading” pathogenic bacteria.

“Aha, surely THAT’S proof that we should all avoid gluten?” Again, not so fast!

Perhaps the most noted researcher in this field, Dr. Alessio Fasano, has often said that gluten is toxic to every human BUT not everyone will get sick. This is a REALLY important distinction. Especially considering the, dare I say, scaremongering there is around the idea that anyone who eats gluten is causing themselves to develop a chronic illness.

As Fasano says: “…gluten is toxic for everybody, HOWEVER very few will lose this battle”.

The reason why the vast majority of people don’t “lose this battle” is because they can deal with this threat. The gluten is cleared with no lasting problem, zonulin levels drop and the shoe laces are tied up again.

It’s in much the same way that most of us will not lose the battle with the vast majority of potentially infection-causing bacteria we come into contact. We can deal with it.

So it would seem the increased intestinal permeability caused by the zonulin release is most likely transient as opposed to permanent. Also factor in that we turnover gut cells within a day or two and it further suggests we can “recover” from the exposure.

So let’s get back to the sandwich dilemma and finish off with my conclusions.

The aforementioned Dr. Alessio Fasano, co-authored a recent paper which sums up the current state of things pretty well:

“However, apart from unfounded trends, a disorder related to ingestion of gluten or gluten-containing cereals, namely non-celiac gluten sensitivity (NCGS), has re-surfaced in the literature, fueling a debate on the appropriateness of the GFD for people without celiac disease.

Although there is clearly a fad component to the popularity of the GFD, there is also undisputable and increasing evidence for NCGS.

However, we require a better understanding of the clinical presentation of NCGS, as well as its pathogenesis, epidemiology, management, and role in conditions like irritable bowel syndrome, chronic fatigue, and autoimmunity.

Before we can begin to identify and manage NCGS, there must be agreement on nomenclature and definition of the disorder, based on proper peer-reviewed scientific information.”

So what can we take from what is currently known?

Feel free to interpret things as you wish. Certainly don’t take my word for everything. But I’ve taken quite some time in digesting (no pun intended) all this, as is probably evidenced by the number of references in this post.

Based on that, this is where I currently stand on this whole deal:

Let’s remain open to the emerging research in this area and accept that right now, we’re just not sure how likely it is for gluten to be problematic for a given individual.

Oh, and if since the opening questions in this post you’ve been wondering “yes, why are gluten-containing foods so delicious?” it’s probably due to the fact that when gluten-containing flours are kneaded with water, the gluten proteins provide elasticity to the dough. Making it lighter, have a better consistency and stick together when it rises. That’s why gluten-free alternatives usually taste terrible.

CLICK HERE TO READ PART 2: Why Did I Feel Better After Giving Up Wheat?