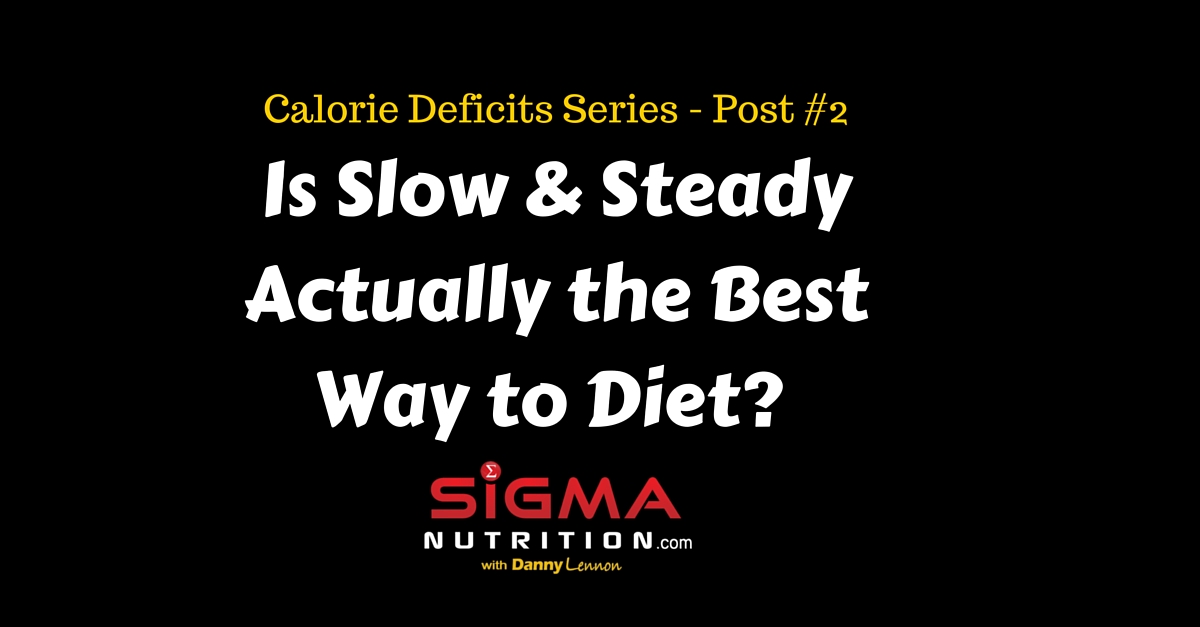 “Many people advise to lose weight at a steady and moderate rate, and recommend not cutting calories too low, in order to preserve muscle mass”.

That’s a line taken from an email I was sent a few weeks back. And it perfectly exemplifies a piece of supposed common sense.

And at first glance this makes some degree of logical sense, right?

With a slower the rate of weight loss, theoretically, you might expect to have more of that weight loss coming from loss of body fat as opposed to lean tissue. And the more aggressive you diet the greater the degree of muscle breakdown and the greater the risk of losing lean body mass. Both of which are true, but only to a certain point.

The real truth is, as usual, a lot more nuanced. Much more gray than black-and-white.

Both are ‘kind of’ true, to some degree. But only to some degree. There is both research and anecdote of folks being able to lose weight rapidly on a large caloric deficit, whilst preserving muscle mass.

It’s common to see a caloric deficit of 500 kcal/d prescribed as a moderate deficit in which weight loss should occur at roughly 1 lb (0.45 kg) per week. This is based on the loose assumption that 1 lb of body fat has 3,500 kcal of energy that can be metabolized to make up for that shortfall. Whilst in many cases this may be a decent approximation, it is flawed for many reasons. One, as mentioned earlier, is that the deficit will be made up for by metabolizing not only body fat, but glycogen and bodily proteins as well. However, I do not prescribe a 500 kcal deficit for a number of other reasons.

I believe that proportional caloric deficits should be prescribed (i.e. those set as a percentage of the individual’s maintenance caloric intake).

If you use absolute numbers of calories (e.g. 500 kcal) then how “aggressive” that diet will be is dependent upon the typical energy expenditure of the individual in question. For example, by using a 500 kcal deficit across the board, you can create a scenario where for one individual the diet is very mild and another it is extremely aggressive. Consider:

Despite using the same absolute deficit, in the above examples you are inducing caloric decreases of 10% and 33% respectively.

So if we go by percentage reduction, we then must decide what constitutes a slight, moderate, large, extremely large, etc. calorie deficit. You’re not going to find exact definitions that everyone goes by. However, others have put together ranges that likely serve well for our purposes. Lyle McDonald classified them as:

Really how “aggressive” a diet is can be viewed along a spectrum of the percentage drop below maintenance intake. You could also make the argument that you could rate the “aggressiveness” of a diet in a subjective manner, thus meaning it will vary from person to person.

Nevertheless, we’re just playing semantics at this point. The above classifications suit our needs for this article.

Additionally, it also seems that the initial amount of body fat someone has can impact the amount of fat loss they experience. Models produced by Kevin Hall suggest that those with more body fat will need a larger deficit than leaner people to lose the same amount of body fat:

“The resulting model predicts that a larger cumulative energy deficit is required per unit weight loss for people with greater initial body fat – a prediction supported by published weight loss data from obese and lean subjects. This may also explain why men can lose more weight than women for a given energy deficit since women typically have more body fat than men of similar body weight.” (Hall 2015)

Now, let’s revisit those two assumptions on which the “slow and steady” dieting philosophy is built:

Does a Large Deficit = Muscle Loss?

Recently, data from a study headed up by Tom Longland out of Stu Phillips’ lab at McMaster showed that not only did young men (~ 23 y.o.) in an four week study not lose muscle mass despite a FORTY percent calorie deficit, they were actually able to increase muscle mass (+ 1.2 kg), when resistance training and a high-protein diet (2.4 g/kg BW) were used. (For more commentary you can check out this podcast episode with Caoileann Murphy who was part of Stu’s team at McMaster).

Just as an interesting side note, that high level of protein intake and thus higher per-meal doses of protein in the Longland et al. paper could be what allowed MPS to be maximized despite the deficit. Moore et al. (2015) previously pointed to a protein dose of 0.25 g/kg per meal as sufficient to maximize MPS when someone is in energy balance. In the Longland et al. study, the lower protein group (1.2 g/kg BW) were pretty much consuming this figure; 0.23 g/kg per meal. But as pointed out by Murphy et al., the deficit could reduce the sensitivity of MPS to that feeding. And so the high protein group were able to maximize the MPS response as they were consuming 0.48 g/kg per meal.

So we can see that large caloric deficits do not always lead to muscle loss (and in fact muscle can still be built), especially when we use adequately intense/novel training stimulus in combination with a high protein intake. Of course, taking into account the populations in such studies. It’s highly unlikely an advanced bodybuilder would build over 1kg of lean body mass in 4 weeks whilst in a 40% calorie deficit now isn’t it?

But that’s not to say advanced trainees cannot preserve/gain muscle in caloric deficits. We see that capacity over and over again in studies. It’s just a case that the harsher the deficit in already lean individuals carries a greater risk of muscle catabolism.

Do Large Deficits Lead to More Weight Re-gain in the Long-term?

Earlier we alluded to two assumptions that are the basis for believing slow and steady is always best.

Let’s now turn our attention to the second of those. Will a more aggressive diet mean that the dieter will be more likely to binge or over-compensate after the diet and therefore gain back more weight?

A 2010 study  looked at a 6-month lifestyle intervention and 1-year extended care program in obese women (~ 59 y.o.). In that intervention they were encouraged to reduce their caloric intake to a level that would predict a loss of 0.45 kg/week (~1 lb/wk). Then based on the women’s response to the diet over the first month, they were classified by weight loss; slow, moderate and fast. 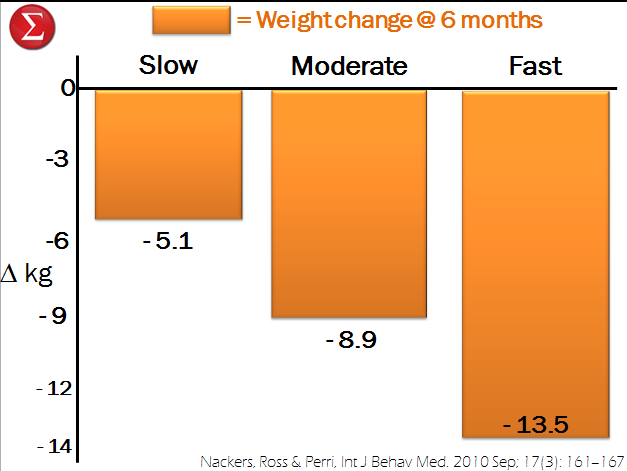 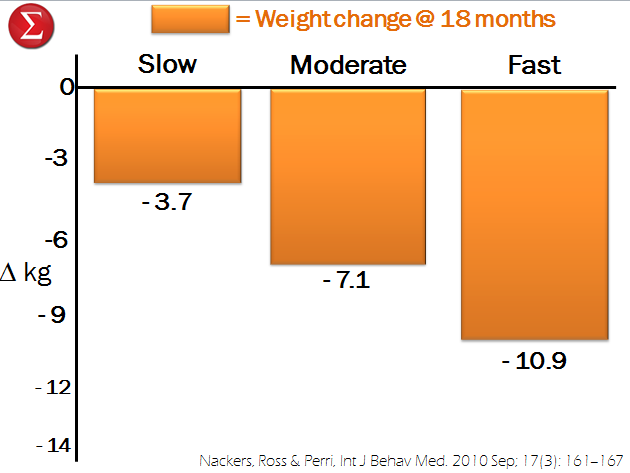 As should be clear by now, we always need to contextualize things and ask in what specific scenarios are we talking about. For illustrative purposes, here are two extremely different individuals to consider:

How likely is it that both of these individuals would lose the same amount of lean body mass if we were to put them on an extremely low-calorie diet for a couple of months?

I think as a general rule of thumb, it’s prudent to consider that the leaner an individual is and/or the more importance placed on athletic performance, the more gradual the rate of weight loss should be and therefore the more moderate the deficit should be.

There are still exceptions to this “rule” however.

A study on Finnish track and field athletes highlights the effect of leanness (Huovinen et al., 2015). This gives a good insight as all the participants were National level athletes and between 20-35 years old. In the study they were split into two groups:

Despite being lean and highly active, the athletes on the large deficit lost predominantly body fat (almost 2 kg) with a small average fat-free mass (FFM) loss (-0.5 kg). But interestingly when you look at individual data points you see that the ones who were able to preserve fat-free mass were those who were over 10% body fat. Those who were sub-10% body fat lost more FFM.

Of course this is only one study. And of course it’s important to be aware that other data exists. But the reason I point to the Huovinen study is that is highlights a few things that I think are representive of conclusions we can draw from other data and personal experiences with lean individuals doing high levels of sport training:

We could go deep into the weeds on these points but that’s not really my intention in this article. Rather, I’d prefer to look at this pragmatically and ask “does it even matter?”

Does Muscle Mass Loss Even Matter?

This might sound like an idiotic question. I mean, why train so hard to add muscle mass if you’re just going to lose muscle once you start dieting?

Well we need to ask ourselves:

I would think that, again within the context of proper training and protein intake, that the answers are most likely:

We could spend a whole other article getting into this. But thankfully we don’t have to. Much of the reasons why I don’t think losing some muscle mass during an aggressive diet is much of an issue, are essentially the same as Greg Nuckols highlighted in some previous discussions of myonuclear domain theory (for example in the first half of THIS POST or summarized HERE).

Essentially, yes you may lose some LBM during very aggressive dieting periods BUT:

The purpose of this post is NOT to serve as a “pro-aggressive dieting” stance. Nor is it to push the idea that using large calorie deficits is “better” than more slight calorie deficits.

It is also NOT a thorough literature review. I’m aware there are conflicting studies. The reason the studies in this article were included is because they are representative examples of other research showing a few important things:

To conclude, the point of this article is that rather than presume a certain method is always the best, we need to remain critical in our thinking and consider the various scenarios that could be applied.

Nothing in nutrition is ALWAYS the best option or THE one true way to success. Slow vs. rapid weight loss (or slight vs. large calorie deficits) is just another example.

[EDIT: Since writing this article, some of these topics were discussed on the podcast in episode 128 with Martin MacDonald. Listening to that is highly advised as an adjunct to this material]

In part 3 of this series, we’re going to dive into more practical applications of this. Looking at the pros and cons of aggressive dieting.

LINK: The Pros and Cons of Aggressive Dieting [Calories Deficits #3]