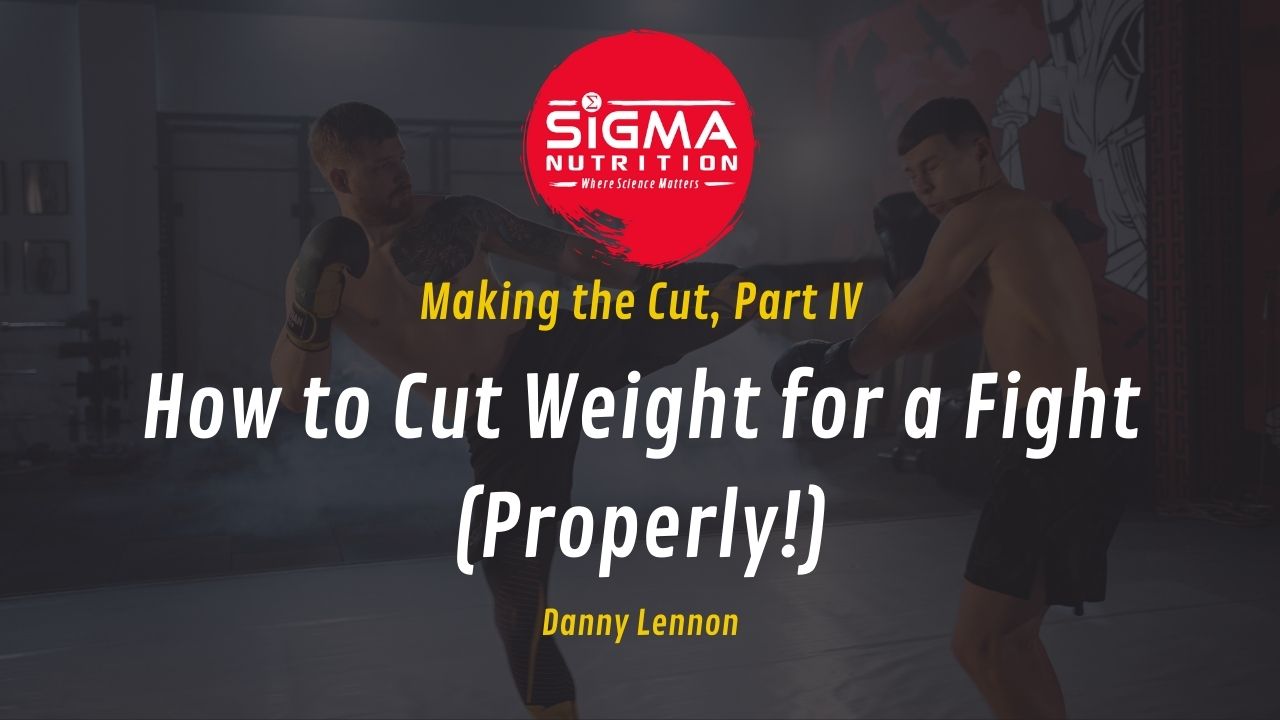 [This is the 4th post in a 4-part series. You can find the others here: Part I, Part II, Part III]

In part II we discussed how “Cutting weight” refers to the process of weight manipulation in the few days leading up to, and following, the weigh-in for a fight. It does not refer to losing body fat, per se.

Weight cutting is a process we use to allow a fighter to compete heavier than the limit set by his/her weight class.

So for example, a fighter that is competing in the 77kg division may begin fight week at 83kg, make it down to 77kg for the weigh-in by “cutting weight”, and then re-hydrating and re-stocking glycogen to get back up to somewhere around 83kg the following day for the fight. 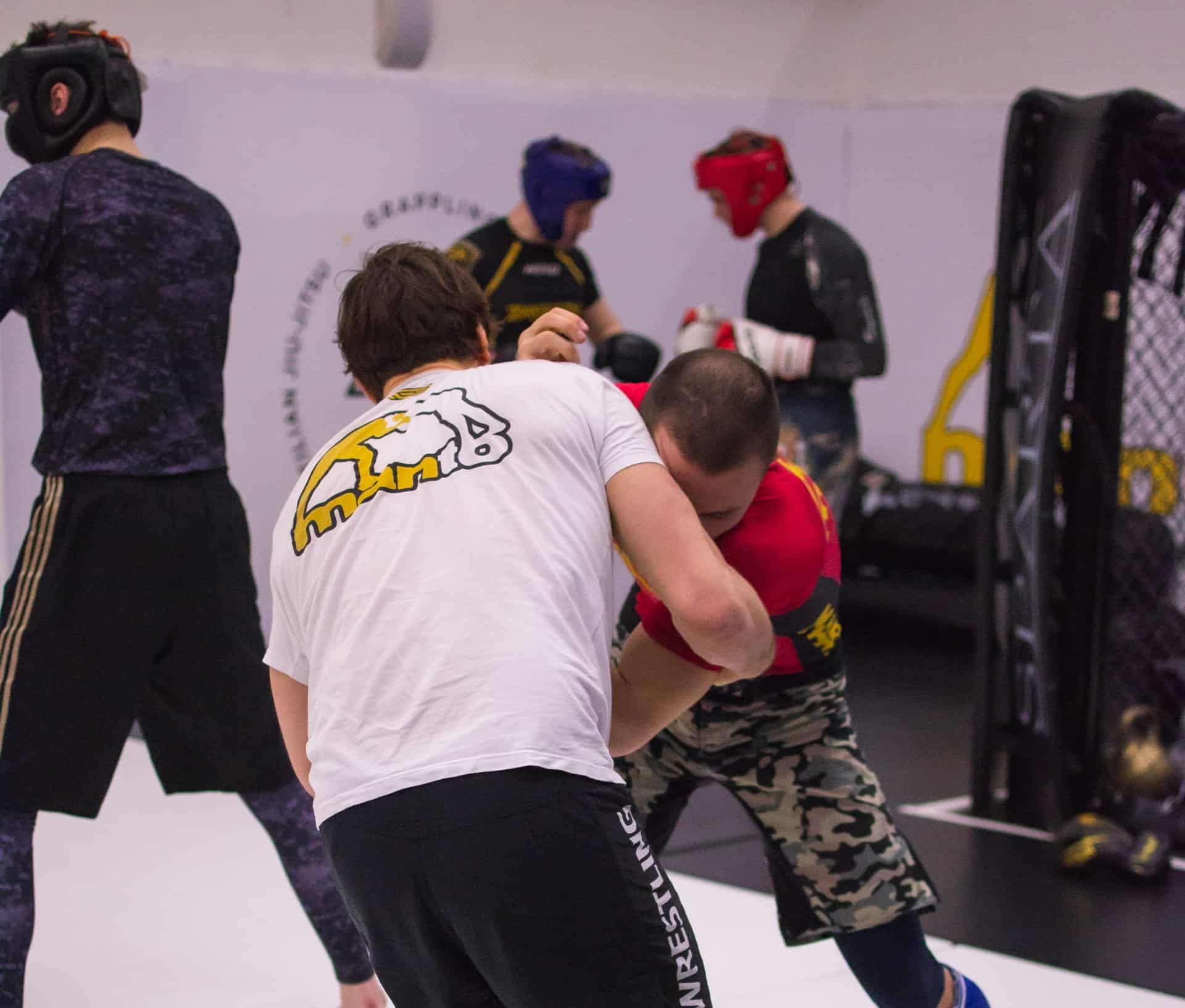 This of course is based off a 24-36 hour lag time between the weigh-in and the fight. In sports where there is a much shorter period between weigh-in and competing, then weight cutting in this way is a disaster.

For example, in Brazilian Jiu Jitsu (BJJ) where weigh-ins take place just before competition, then any attempts to cut weight will fuck you over performance wise, regardless of how much of an advantage you feel being heavier than your opponent will bring. The “re-fuelling” window is just too short or sometimes even non-existant.

The process lots of fighters go through is sub-optimal at best. And downright stupid at worst. If you still think doing burpees in a sauna whilst wearing a bin bag is the way to make weight you’re in real trouble.

So what’s the right approach to take?

First of all, it’s important to have the fighter within reasonable sight of the weight they need to make.

About seven days before fight night you should have no more than 8-10% of your bodyweight to lose in my opinion.

If you are much heavier than this than either one of two things has happened:

The exact number that equates to best performance will be very individual. For any particular fighter it could be 5kg (11 lbs), 7kg (15.4 lbs) or even more than 10kg (22 lbs), depending on the weight class and how that individual fighter reacts to that cut.

This is why test cuts are so important. You don’t want a fighter trying to cut 10kg in weight for an important fight if the most they’ve ever done before is a couple of kilos. Please be fucking smart about it, eh?

Obviously from this point on there are going to be several factors I would need to take into account before deciding on the precise details, such as:

Perhaps the best way to look at this would be to give you a case study example. Cian, who I mentioned in previous posts, won his fight at 70 kg in devastating fashion in March.

In January Cian was at about 78kg. So over the course of the next number of weeks he was able to drop a couple of kilos in body fat (based on what was outlined in part I & part II). A week out from fight night Cian was about 76 kg, leaving 6 kg (13.2 lbs) of a cut. This was a perfect position to be in as the cut wasn’t so big it would impair performance.

While many have heard of (and probably used) water restriction to cut weight, I’m not convinced most actually know how it works and so what it’s achieving.

The water load/restriction cycle is based on trying to manipulate something called the renin-angiotensin-aldosterone system (RAAS). This is a hormone system that regulates blood pressure and water (fluid) balance. Specifically, we’re focusing on the action of two hormones: aldosterone and anti-diuretic hormone (ADH).

How do we manipulate the action of these hormones?

When you start taking in a lot of extra fluid, your body will down-regulate aldosterone. Because aldosterone’s job is to conserve sodium, when you down-regulate it’s action you are essentially losing sodium and therefore water by urinating it out. So essentially, you drink lots of water, you turn down aldosterone and you start pissing more.

But here’s the cool thing…

When you drop you’re water intake, it takes quite a while for body to realise this and up-regulate aldosterone again.

High intake of fluid will suppress anti-diuretic hormone also and so it induces diuresis (i.e. pissing out water).

So this was how we structured the water load for Cian, based off a Friday afternoon weigh-in at 1pm:

Carbohydrates are essential for a Muay Thai fighter as the intensity demands of the sport mean that a high percentage of the energy supply will be coming from glucose. This requires a full store of glycogen (the storage for of carbohydrates, which can be broken down into glucose) to be present in the muscles (and the liver) for optimal performance.

During the training camp, Cian was consuming plenty of starchy carbohydrates such as sweet potatoes, potatoes, butternut squash, white rice, bananas, etc. in order to ensure he could perform to his best during sparring sessions.

On the week of the fight there are no starches in the diet until after the weigh in. So from Monday until Friday at 1pm Cian was eating about 30g or less of carbohydrates per day. By restricting the carbohydrate intake, Cian was able to completely deplete his glycogen stores over the course of the week.

Naturally, this meant he weighed less. But the other part of this is that for every molecule of glycogen stored in the muscle it will have 3 molecules of water pulled in along with it. Therefore, loss of glycogen means loss of more water which means more weight loss.

So all meals this week are made of a combo of protein and fat. The only difference being in the serving sizes, which get slightly smaller towards the end of the week. By Thursday the meal size is very small in comparison to a normal meal Cian would be eating. Steak with green vegetables and coconut oil would be a typical meal.

The lack of carbohydrates here isn’t a problem as training will be tapered down throughout the final week. Less volume, frequency and intensity all round.

Many people will have heard that sodium retains water. So the idea here is simple. As sodium is limited in the diet it makes the process of flushing water from the body a lot easier. Remove all salt from the diet from 3-4 days out from the weigh-in.

The reverse of this idea will kick in after the weigh-in.

As creatine holds water, stopping supplementation of creatine a week before the weigh-in could allow an extra drop in water weight. However, there is a performance benefit to having creatine saturation in the muscle when the fight comes around and it takes many days to completely load the muscle with creatine. So there is a clear trade-off. During the rehydration process, I make sure the fighter takes in several doses of creatine in an attempt to get creatine levels in the muscle back up.

For the most part I steer people away from using diuretics. People can really do themselves harm when they mess around with them without understanding what they’re actually inducing in the body.

That said, there are some natural diuretics that may be useful to help things along in the last couple of days if you feel you’re in danger of coming in overweight. Dandelion root is quite mild and is unlikely to have any bad effects.  Dosage would be something like 3g per day, split over three equal doses. This should be only used for the last 1-2 days of the cut and only if you feel you really need to.

Inducing sweating through saunas, hot baths,  wearing sauna suits, etc. can sometimes be helpful for taking off the final few pounds. You don’t want to be trying to cut large amounts of weight in this manner. That is going to hurt your performance in the fight. You want to use these methods for the final few pounds, ideally as close to the weigh-in as practical.

Obviously, after the weigh-in you want to begin the rehydration process as soon as possible. It’s important to note that hydration is not just water. It also includes balancing mineral electrolytes. So immediately after weighing-in you want to have something that can kick off the process of addressing these. Now is also a decent time to start restocking glycogen (carbohydrate) stores and so including some easily digestible carbs is a good shout. Most commercial isotonic sports drinks will take of these so you can just drink one of those.

I make up my own shake mix of:

I’ll have the fighter drink that over a 30 minute period after the weigh-in.

Every hour, a healthy kidney at rest can excrete 0.8-1.0 litres of water.  So taking this as a guide, aiming for a rehydration strategy of 1L per hour is a decent way to go. Don’t just down as much water as you can as quickly as possible. Do it in a way that allows you to absorb as much as possible.

So following the completion of the post-workout shake, they’ll consume 1L of fluid per hour, consistently sipping away. This will be in the form of water for some of the time and I’ll add in a few of those shakes outlined above at others, depending on what food is being consumed around that time. The rehydration should continue right up until about 2.5-3.5 hours before the fight. After this point just sip on water as need be.

You’ll also notice that glutamine is also part of that shake. Glutamine helps to increase both water  and sodium absorption.

While rehydrating is critical, it is not the only “refuelling” that needs to take place. All those glycogen stores that we wiped out during the weight cut, now need to be restocked. This will not only increase weight (glycogen also draws in water with it as well) but by maximising storage, the maximum potential amount of carbohydrates will be available to use during the fight.

During the cut we dropped all salt from the diet due to its ability to hold onto water. Therefore it’s logical that after the cut we want to do the reverse. Therefore add plenty of salt to all meals post weigh-in.

Many of my thoughts and practices have changed slightly over the years and become more refined as more research has come out and as more pro athletes have tested our protocols. All of my most current thinking and methods is included in the Sigma Weight Cutting System for MMA & Boxing (click for details). 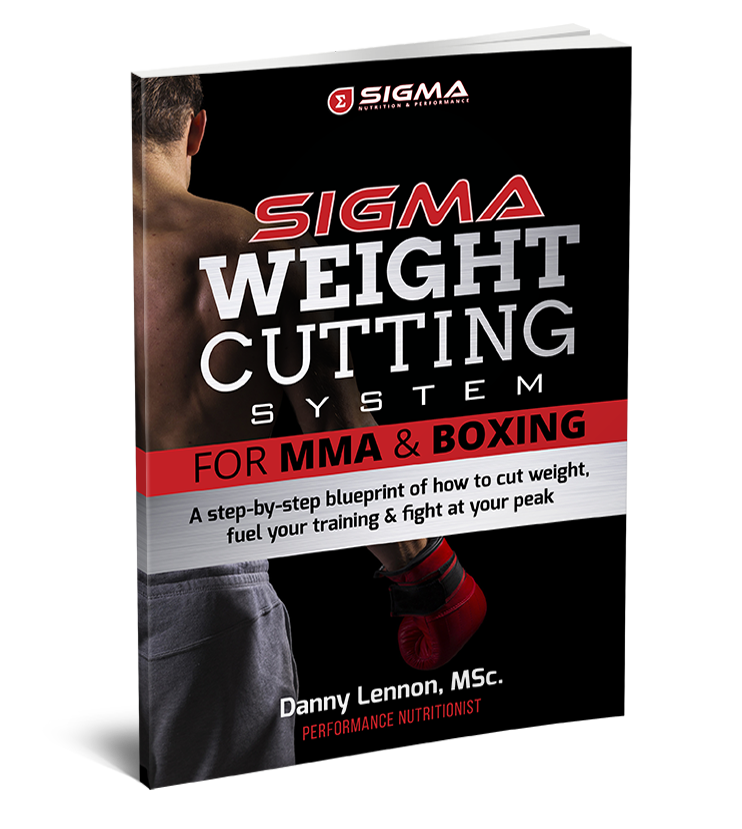