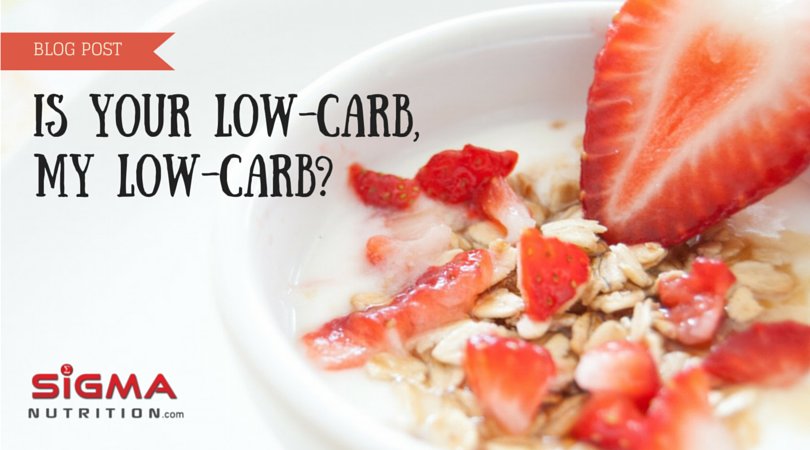 In Monday’s post on ‘Just How Effective is Low-Carb Dieting?‘ I asked the question: what do we mean by “effective”?

What do we mean by “low-carb”?

What the hell is a low-carbohydrate diet anyway?

We should know what a low-carb (LC) diet is by now, right?

But despite all this, are we actually in universal agreement on what a low-carb (LC) diet even is?

I mean, what defines the cut-off point?

This is a problem that continually plagues attempts to accurately determine just how effective carbohydrate restriction may potentially be.

And remember that Naude et al. meta-analysis I mentioned in my last post? The one with so much fuss around it?

Well look at their classification of  a LC diet:

A diet with 40%+ can still be low-carbohydrate? So it’s low-carb yet the predominant macronutrient is… carbohydrate?

A diet with 65% of calories from carbohydrates is NOT high-carb? It’s “balanced”.

If  65% of all your calories are coming from a single macronutrient, then what does “balanced” mean?

So when I see this, I can certainly understand where some of the low-carb camp are coming from with their disillusionment at how we can extrapolate the findings of this analysis to dieters employing a diet that truly restricts carbohydrate intake to a minor contributor to overall intake.

OK, back on task…

So we have some studies saying < 45% of calories from carbohydrate means that diet is LC. Others claim you need to be eating < 60 g/d. The classifications are all over the place. We’re not even using the same units.

Hence why it becomes difficult to compare studies of LC diets. Or at least why evaluations of the body of evidence are left open to dispute.

I think going by the percentage of calories is largely useless as it tells us nothing about the absolute amount of carbohydrate someone is ingesting unless we know the calorie intake of the individual.

But on the flip side, setting cut-offs based on absolute amount in grams is flawed as we don’t take body size or calorie intake into account. So for example is 140g a low carbohydrate intake for both a 110 kg dude AND a 52 kg woman?

So the next logical thing to consider is basing carb intake on a grams per kg of bodyweight (g/kg BW) basis. So if we pick a totally arbitraty number (as an example) of, say 1.5 g/kg BW, then we would have an intake of 165 g  for our 110 kg guy and 78 g for our 52 kg lady. Perhaps a bit better. But this throws up it’s own problems.

Many of those at the highest bodyweights will be obese  folks who are probably candidates for the lowest carb intakes, rather than the highest. Plus, we have literally no guidelines in the literature that classify diets on the basis of g CHO/kg BW.

What Impact Do Protein & Fat Play?

If we are going to lump all low-carbohydrate diets together (whatever we decide to class that carb threshold as) when analysing or reviewing the data, how much attention needs to be placed on their protein and fat levels?

Are two low-carb diets the same if they both contain 125g of carbohydrate?

Are these diets going to have the same effect on say glucose metabolism and insulin levels? What about thermic effect of feeding (TEF)?

You already know the answer.

Does a carb intake have the same effect on everyone?

You already know the answer to this as well, don’t you?

So if we know that they effect people differently, then surely what is considered “low” is subjective, as opposed to our futile attempts to come up with objective definitions.

Is a diet of 250g of carbohydrate, low in carbohydrates? No? What if we’re talking about an elite level Olypmic athlete, weighing 100kg and training three times per day? Would that intake seem low now?

So what IS a low-carb diet?

I don’t know how we can settle this. I mean, I think it comes back to my earlier point that this is pretty much always going to end up as a subjective classification as opposed to an objective one.

And you know what? I’m totally cool with that. And here’s why…

I DON’T CARE IF SOMEONE’S DIET IS TECHNICALLY “LOW-CARB” OR NOT.

I only care that, whatever the actually carb intake comes out to be, is one which suits that person and supports their goals. I don’t need to know whether it falls into someone’s defined range of low-carb or moderate-carb or high-carb.

So the question we really need to be asking is: for this individual is this carbohydrate intake too low? Similarly, is it too high?

For the “average” person, a carbohydrate intake of 2 g/kg bodyweight is probably a decent point to declare as neither “too low” nor “too high”. So a 75 kg guy will be looking at 150 g of carbohydrate per day.

Does that mean it’s optimal for everyone? Of course not. Slap yourself if you were going to ask me that.

But what that figure does provide is:

As an example of an exception, if you train hard in the gym 10-12 times per week and your intake is about 2 g/kg BW then you are probably too low.