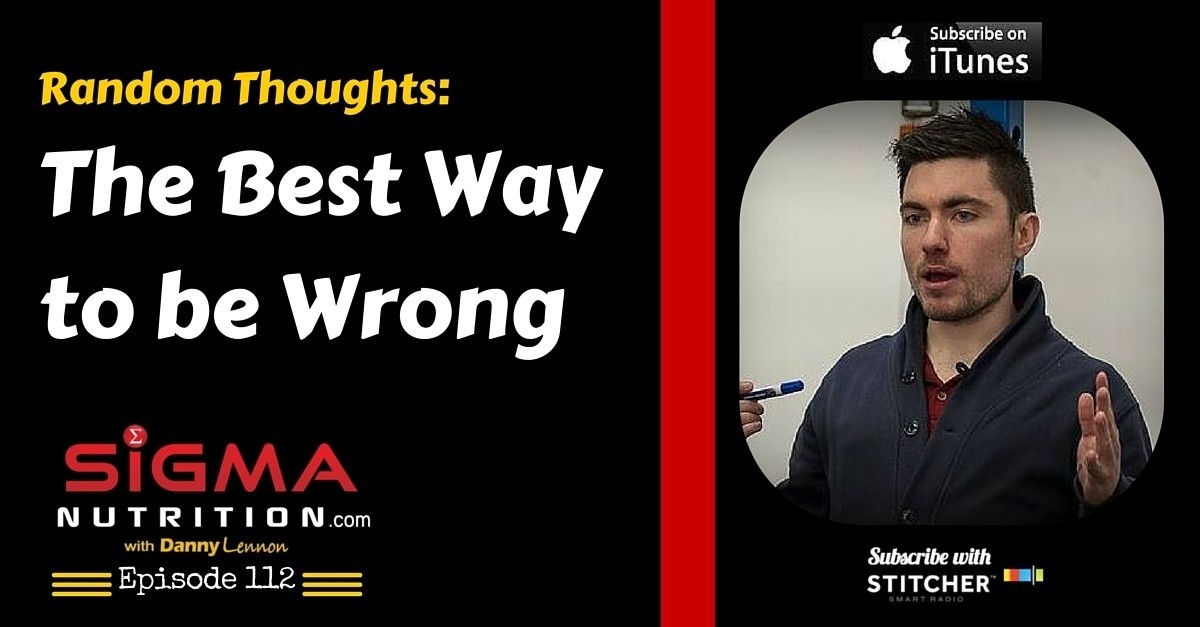 We often see being wrong as something inherently bad. Something to avoid. Something that signifies that we should be embarrassed.

And sure, trying to be correct is great.

That is a real possibility. Because here’s the thing; anything we ever say or believe can only ever be our current best thought on that issue. But our thinking is dynamic. It evolves. It expands. It filters out ideas and concepts, whilst embracing new or better ones.

Or at least that’s the way our thought process and knowledge base should operate.

But if you’re so scared of being wrong, then you won’t actually say anything. Anything that you do say will be extremely conservative. Not that conservatism doesn’t have it’s place. It does. But if you have an idea or belief then share it. Don’t be frozen into inaction.

The important bit comes after that.

What about if you’re wrong?

Whereas a “better” Way to be Wrong:

When we talk about an evidence-based approach being the best default position to start with, all of us with that philosophy must remember that wasn’t always the case. We didn’t always know what we know now. It is likely at some point in the past we too held misguided beliefs. I know I sure did.

I’ve previously mentioned how some of my views have changed over the years; I used to think gluten wasn’t fit for any human to consume. I used to think that we’d solve the obesity epidemic if everyone was just advised to go low-carb Paleo. I once believed that saturated fat should be limited as much as possible in the diet. All of these things I now disagree with. Along with many others I could list out but I’ll spare you the time of trawling through what would be quite a sizeable list.

So if it’s impossible for any of us to start knowing everything, then why is it so many people seem to be so comfortable with berating other people for saying something incorrect.

Now, I hate pseudoscience as much as anyone else. But I think we need to understand an important distinction between being helpfully critical in a constructive sense, versus flat out being a hater.

Because this thing works both ways, right? There is this thing in fitness right now where anytime you criticize something someone says, their automatic defence is “oh you’re being a hater”. Which is not necessarily true. That said, haters do exist.

So how do we make that distinction between being helpfully critical in a constructive sense, versus being a true hater…

I believe it simply comes down to the motive:

Because we need to allow critical evaluation of content.

And so I think we need to have a set of criteria or a checklist that we can look to in order to determine if the criticism is warranted or just straight-up hatin’.

If you write a book, a blog post, a Facebook update or a Tweet, you need to be able to stand over what you said in a confident enough manner that allows to be objectively critiqued. Or if you can’t stand over it, be able to say “ok, these counter-points are legit, I may need to change my stance on this”.

So under what conditions can we consider it acceptable to criticize, without being a hater?

First; It must not be a personal attack that does not address something related to the point of contention.

Second: The criticism should only be delivered when you are clear on the point being made and in what context. Don’t use reductio ad absurdum. Don’t take one sentence out of the original context it was delivered.

Third: Try to understand why this inaccurate/incorrect information was given out. Was it because someone didn’t know any better and genuinely thought it was true (perhaps they hadn’t came across the research you have)? Or was it made by someone who knows they’re being dishonest but is doing so due to ulterior motives (often financial)? The motive can often dictate how harsh you should be. It also is the difference as to whether someone’s character should be called into question or not as part of the criticism.

How do you go about critizing someone’s position without being a “hater” or an asshole?

Perhaps the best sequence I’ve came across is from Dan Dennett in his amazing book ‘Intuition Pumps & Other Tools For Thinking’, which I recently just read for the second time.

In it, Dennett outlines four steps on how to compose a critical commentary:

So to circle back to my initial discussion point of how to be wrong in a good way, I think it was summed up excellently by a line taken from Ralph Waldo Emerson’s essay Self-Reliance, which says: “Speak what you think now in hard words, and to-morrow speak what to-morrow thinks in hard words again, though it contradict every thing you said to-day”

So to me that transfers across to some of the ideas we’re getting at in relation to not being afraid of being wrong: Form your ideas and hypotheses based on your experience and reading, and discuss them openly with the world. If you find they are wrong, that’s absolutely fine.

Admit you were wrong, highlight the new information you learned and continue the cycle of creating better quality information.

So don’t fear being wrong. Instead fear always trying to be right. Or trying to give the impression to others that you are always right.

Exercise humility, listen to others, learn more, say I was wrong, and become better.

That’s all education and learning, and self-development for that matter, is.