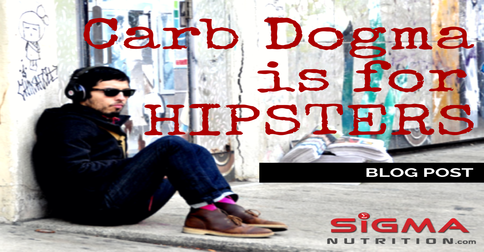 In what seems to be an increasingly common occurrence, I am seeing popular nutrition trends emerging, following something I can only describe as the “hipster pattern”.

You know, the “get-on-it-now-because-its-the-opposite-to-everyone-else” thing. And once everyone else starts doing it, it’s no longer cool.

We were being erroneously told that eating most of our calories from carbohydrates was a good idea. Only to realise that this in fact is probably not all that helpful for a large number of people. With this, the low-carb scene exploded when the word got out.

And at first it was cool.

You know, if you were low-carb you were ahead of the curve. Defying conventional advice. Outwitting those government guidelines and uninformed doctors. You were convinced you were doing it perfect, despite all the concerns of your friends and family over your impending heart attack or not having any energy.

You were proud to be a low-carber. Maybe you still are.

But it seems like the low-carb thing is old news now, doesn’t it?

Everyone “knows” that ditching those damn carbs will magically strip away fat, right? That you can’t lose weight when you’re eating carbs because of that pesky insulin making you stay in “fat storage mode”.

Telling people about your low-carb diet isn’t as fun anymore, is it? People know about it. They’re no longer intrigued. They just shrug their shoulders. To get lean you lift weights and cut the carbs, right?

It just ain’t hipster any more. Like Chuck Norris-esque beards. 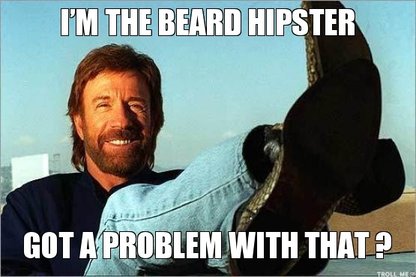 Perhaps because of this, a new wave of “I eat high-carb and get ripped” hipsters have emerged. THAT is the new cool.

And it meets the perfect hipster criteria: it’s the opposite to what the majority are doing to get leaner.

And the thing is, in a lot of cases it can be a good approach.

Don’t champion the quality of your diet based on the carbohydrate level of it. If that’s what works for you then cool, but it doesn’t mean it’s the “best” way to go.

In fact, classifying yourself as low-carb or high-carb or whatever might be the problem. Just eat in a way that works for you. Let the carb intake fall wherever you feel best but don’t become a zealot about it. And certainly do not be a dick to people over it. Chill out.

Don’t be that zero-carb guy who sees it as THE way. And don’t be the anti-low-carb guy to talks to people like they’re idiots just because they like eating a diet low in carbs.

There are so many variables that are needed to work out the best nutritional approach for an individual, that bashing people who have a different approach, particularly in relation to macronutrients, is kind of ridiculous.

If you are on a low-carb diet and it is genuinely working for you, then cool. But just don’t spout rubbish about carbs being the sole reason people aren’t lean. That’s silly.

Similarly, if low-carb didn’t work for you, you went back to a higher-carb intake and now you feel great, then awesome! But don’t think you need to say low-carb is for idiots. Some people will legitimately do best on a low-carb intake or others even need a ketogenic diet.

Step 1: Work out what works best for you

Step 2: realise WHY that worked for you before you tell other people they have to do it.

Base your carb intake on what is needed for YOU based on YOUR goals, training, health status, how you feel, background history, etc.

For example, I’m currently around 150g carbs most days but I have never once said that everyone should be eating 150g per day. However, I could explain clearly why I use that.

Make sure you can do the same.

Don’t always try to be a hipster when it comes to nutrition.