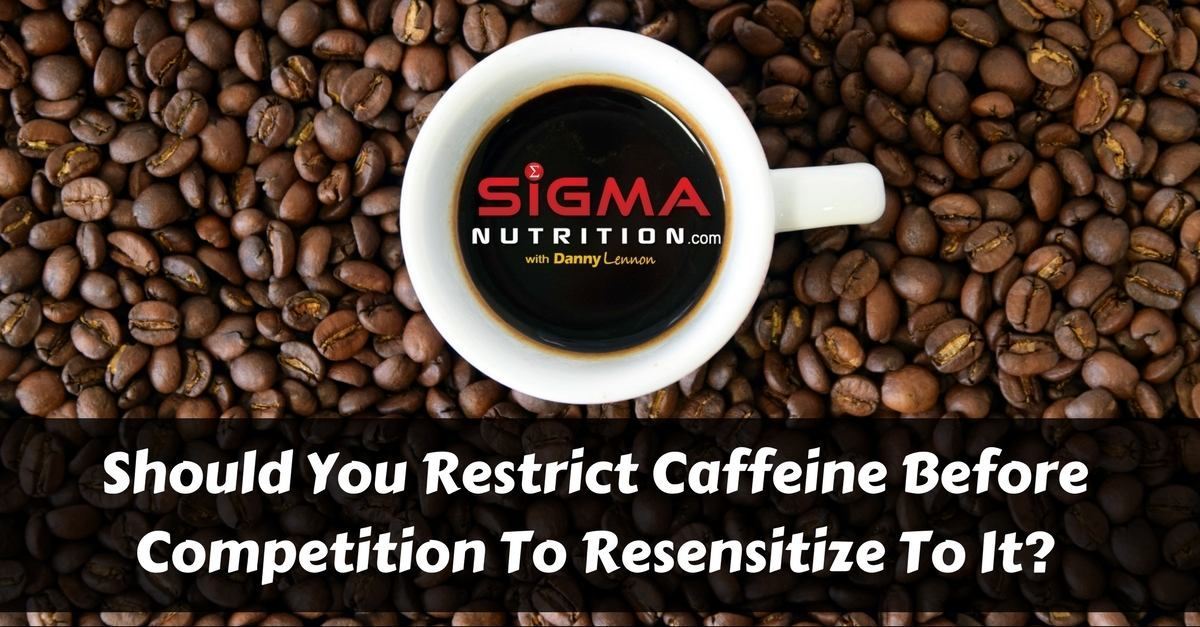 I recently received an email from someone who had purchased the Sigma Weight Cutting System for MMA & Boxing, asking why I had advised athletes stop caffeine consumption in the final 7-10 days before competition.

This is an interesting one because my stance has slightly changed on this matter in recent times. So I’d like to outline both my original thinking, and some opposing thoughts, in this piece.

As you already likely know, caffeine is quite the stimulant. And its effects are very quickly noticeable. And the literature supporting it’s beneficial impacts on strength [1] [2], endurance [3] and sports performance [4] [5] is pretty extensive. It can even allow for better training performance when you are tired or short on sleep [6]. Or specific to the demographic in the question, we have data showing it’s benefit for grip strength, jump height and power production in elite level Brazilian Jiu-Jitsu (BJJ) athletes [7].

However, one potential mitigating factor is our ability to increase our tolerance to caffeine. Essentially, the more consistently we consume caffeine, the less sensitive we are to it’s physiological effects.

So originally the idea behind caffeine withdrawal in the week or so leading up to competition was to “re-sensitize” the athlete to the effects of caffeine. By not having any for a period, they can shake off the caffeine tolerance they have built up, and therefore will be more readily influenced by the caffeine when they take it before the competition (a fight in this particular scenario). This is similarl to what is often done with endurance sport athletes; where athletes will stop taking caffeine a week or two before an event so they can re-sensitize.

However, whilst it’s clear that people do build up a tolerance and you are more stimulated by caffeine after not taking it for a while, there is relatively recent research suggesting that it might not  actually matter for sports performance. The 2017 study out of Brazil [8] showed that the performance effects of acute caffeine supplementation during an 30-min cycling time trial were not influenced by the level of amount of caffeine that the athletes habitually consumed.

In the study 40 endurance-trained cyclists were allocated into groups based on their daily caffeine intake:

These cyclists then completed 3 time trials in the fastest time possible following ingestion of the following:

So at least when it comes to endurance time trial performance, there may not be as compelling a need to reduce caffeine intake in the lead up to an event as we may have assumed.

The Lack of Consensus

And sure enough we have conflicting evidence. For example, people who typically consume very little caffeine may be susceptible to having performance benefits mitigated by caffeine tolerance if they start habitually consuming even relatively low amounts of caffeine.

A study out of Loughborough University in the UK [9] came to this conclusion when looking at the effect of 28 days of low dose caffeine ingestion on people whose habitual intake was typically low (< 75 mg/d). Here’s how they set things up:

So perhaps for people with low habitual intakes, if they are planning on using caffeine to boost performance pre-competition, they might be best served by staying away from it in the week(s) leading up to it.

But what about in other sports or performance markers? Would the results of this study carry over to a combat sports athlete? Or a strength sport athlete? There are lots of answers you are probably quite rightly asking.

Right now, I guess it’s still up for debate. We could probably go back on forth on studies in much greater detail, and get into the weeds of each one. That’s probably best left for another time, and perhaps for someone who is much more deeply entrenched in the caffeine and sports performance literature.

This post is not intended to be a literature review of this topic. So I want to leave aside studies for a moment. Rather I want to focus on some interesting questions for practitioners and considerations for practical implementation that actually address the question sent in the original email.

Practical Considerations for Caffeine Use or Restriction Pre-Competition:

To help you make a decision for yourself or the athletes you work with, particularly those cutting weight for competition, here are some things to consider:

In conclusion, as we see over and over again in nutrition, we are lacking one true definitive answer. There is rarely ever one answer, rather there are simply trade-offs. So use this information and your own experiences and expertise to weigh-up those trade-offs and make what you feel is most likely the correct decision in each case.

As of right now, if it’s easy for the athlete to do and doesn’t present any negative symptoms, reducing caffeine intake in the final week or so pre-fight may be a worthwhile strategy, as at best it will confer a physiological advantage leading to better performance, and at worst will either have no effect or even a slight benefit via the placebo effect. With the reduced training intensity in this final week, there is no need for pre-workout stimulants or caffeine supplementation, so the only challenging thing to modify is coffee intake. For a number of the athletes, they will continue to have one coffee each morning but leave it at that. Some athletes prefer to completely restrict.

Often times things like that are capable of giving a mental advantage. We already have research showing that just the act of cutting weight makes athletes feel more like “real athletes” and gives them identity. Similarly, I’ve seen athletes who sacrifice the most in terms of food choices actually feel more primed to succeed. It feeds into their belief that they are willing to do what others won’t. For some athletes, restricting caffeine can play into that.

I wouldn’t be surprised if we saw more conclusive data suggesting restricting caffeine and re-senstizing an athlete to caffeine has no actual benefit for performance on re-introduction. But as of right now, because of some uncertainty, and the clear potential for a placebo effect to be at play, I think it’s fair for practitioners to decide to hedge their bets and at least trial new athletes with caffeine restriction to see how they feel. However, it is my opinion that if caffeine restricition causes any issues for the athlete (stress, anxiety, headache, irritability, etc.), then it’s not worth doing, as the evidence for doing so isn’t strong.

I’d love to hear any anecdotal reports from those of you who are athletes who do this, or if you are a coach who recommends (or does not recommend) such a guideline.