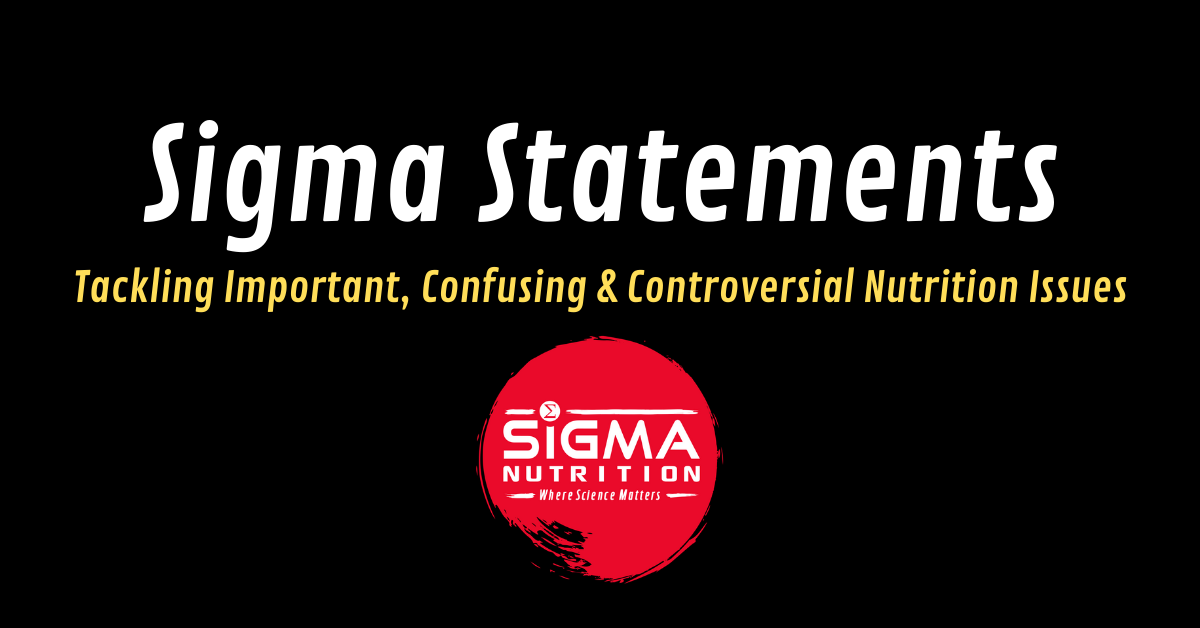 I'm delighted to announce a new resource that we are making available to you: the Sigma Statements!

A Sigma Statement will be written piece that gives a clear walk though and explanation of the current evidence on a specific nutritional science topic, with the aim of having you come away with a clearer and more nuanced understanding of some of the most important (and often hotly debated) topics in nutrition and health.

Although they will discuss science, reseach and link to relevant studies, the statements are written with the aim of not being too difficult to read or engage with. They are not written as peer-reviewed review papers, but also not like typical blog posts. Hopefully the balance between discussing science and being readable is just right!

The statements are also a chance to make it clear to you:

The format and structure may change over time, especially based on the early feedback we receive. Also, we will likely have both podcast and video content add as supplemental to some statements, although the aim will be to ensure they can also stand as read-alone pieces.

For our first several statements at least, most of research and writing has been done by Sigma Nutrition's reseach communication officer, Alan Flanagan. Whilst my (Danny) role has primarily been in editing, making suggestions, etc.

There are many topics that whilst they have been addressed on the podcast, I have stopped short on making my exact position clear on. Most often this is simply due to the guest being the focus of the episode, not me. I also try hard not to overly influence listeners into "what they should think" but rather allowing the conversation to help them make better decisions. Whilst this is overwhelming positive in my opinion, I realize it can leave people unsure on either my, or Sigma Nutrition's, position on a topic. Hopefully these will help.

Also, we felt the need to have some detailed, informative written pieces that could be referred back to or used as something you could recommend to someone looking for more information on a topic, or simply to know the "why" behind a certain position. For example, are there any positions/conclusions you think to be true or know that people you respect hold, but if you were asked to defend that position in an arguement you wouldn't be able? Well, that's an example of having a position without knowing clearly why. These statements will hopefully be able to help in such situations.

Finally, whilst the goal is to be relatively comprehensive in what is covered, we are aiming to stick to primarily the sub-topics that are most relevant for practice and real-world decision making around diet.

If you want to be notified each time a new statement is published, join the Sigma Synopsis mailing list here.