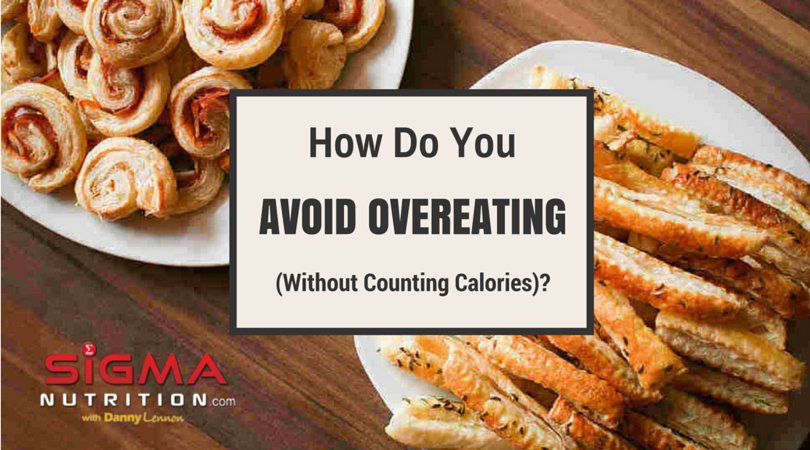 When we overeat calories chronically, weight gain results. This is indisputable.

So if we inherently know that “over-eating is what causes fat gain” then the solution should be pretty straight forward: “Stop eating so much and you’ll lose fat”.

Which is technically true. If you eat at a caloric intake that puts you into a calorie deficit (i.e. the energy you consume is less than that you expend) then you’re bodyweight will drop.

But the problem with that statement (apart from it being as blunt as a hammer) is that it gives nothing in the way of actionable advice. It never gets at the underlying cause. It never gets us to stop and ask “what is driving the over-eating?”

It also does not distinguish between the type of weight lost ( i.e. how much of the weight lost was from actual fat mass as opposed to lean mass, water and glycogen). But I’ll come back to that issue in the next post. For now, let’s consider what’s driving the overconsumption.

The numerous potential reasons for subconscious overconsumption are the reasons why we get fat. We’re talking about those subconscious behaviours that drive excessive calorie intake, which in turn leads to fat gain (or prevention of fat loss at least).

If we can get to the drivers of over-consumption and address them, then we can tackle the actual cause of fat gain.

Is It Our Environment?

Picture what daily life looks like for most people in the developed world. The environment and situations we are surrounded by on a daily basis are essentially a perfect combination of ingredients to make over-consuming calories as easy as possible.

So with all this in mind, it seems like it has never been easier (and more likely) that someone will become overweight or obese.

Which begs the question:

“How the hell can we be lean and avoid constantly over-eating without counting every calorie, stressing over measuring every food item and having to exercise huge amounts of willpower on a daily basis?”

Our body has several feedback systems to communicate when we’ve eaten enough or have sufficient body fat stores.

This is a complex web of communication pathways involving parts of the brain and various actions of the endocrine system.

In their commentary in The Lancet Diabetes & Endocrinology, Ochner and colleagues discuss some of the ways our body reacts to gaining weight in order to prevent further weight gain:

The most attention is usually placed on the action of the hormone leptin.

And for good reason. Leptin can be thought of as our most important regulator of body fatness.

We signal to the brain that we have inadequate energy stores/negative energy balance by reducing leptin levels. When leptin increases to sufficient levels it  signals to the brain to suppress appetite and increase energy use.

As we release leptin from fat cells, the more body fat we lay down, the more leptin we produce. So a nice little feedback system is in place:

In fact, leptin can even respond to increases in our calorie intake before any changes in body fat levels take place. So overfeeding in the immediate term will affect leptin levels. This has been the basis for the propsed physiological benefits of refeeds during dieting phases.

So while leptin is the method of communication between fat tissue and the brain, our brain also receives important information, on which to base it’s drive to eat on, from other tissues.

Ghrelin is produced by cells in the stomach, with increased ghrelin levels stimulating appeptite.

A number of gut hormones are also crucial to appetite and intake regulation. Two in particular have been at the centre of much of the research on appetite and fat gain:

It is well known that the success of gastric bypass surgery in treating obesity is largely associated with the reduced appetite patients have after the surgery due to increases in PYY and GLP-1. When the  responses of these hormones were inhibited by researchers, patients  experienced a return of appetite and increased food intake.

Gut hormones are an extremely important factor when it comes to keeping weight off long-term.

Basing anti-obesity therapy on the actions of these hormones has even been hypothesised.

Similarly, the appetite-reduction many people report on a ketogenic diet seems to be down to effects on appetite-inducing hormones like ghrelin.

According to Ochner et al., 2013, certain factors can “create a biological disposition that fosters the maintenance of an elevated body weight and work to restore the highest sustained body weight, thus precluding the long-term success of behavioral weight loss.”

You may have noticed a blatant contradiction in two points I’ve made so far, namely:

How can that be?

How can we have all this intricate communication between our brain and the cells of our fat tissue or of the gut, that supposedly prevent excessive fat gain, yet as a society we’re finding it so damn hard to NOT gain body fat?

The logical answer is that there must be some sort of breakdown in that communication. There’s something up with the  signalling between the brain and gut and/or fat tissue. It’s dysfunctional.

There are many places something can go awry, some of which I’ll get to in a later post. But for this post, I’m going to just focus on one, leptin resistance.

One well-established and potentially most important example of that “dysfunctional communication” I mentioned is leptin resistance.

As mentioned earlier, leptin is produced by fat tissue and leptin levels are detected by the hypothalamus in the brain. This system is our major regulatory system of body fatness.

The hypothalamus detects leptin levels via leptin receptors which sit on neurons (nerve cells) there.

So the problem of dysfunctional communication is essentially these leptin receptors not working as they should. Hence, the brain underestimates how much leptin is present.

Obese people thus have an elevated bodyweight that their the body begins ‘defending’.

But what exactly causes leptin resistance of the receptors in the hypothalamus?

This is a massively complex and dynamically evolving area of research so we certainly don’t have all the answers on this. Additionally, the point of this post is not to go into detail on leptin resistance so please forgive if some details are skipped over.

But what exactly causes someone to continue to overeat when body fat is already high and so leptin is elevated? In other words, how does someone become severely overweight?

A deep look into the etiology is well beyond the scope of this post but if you’re interested in this area I’d highly recommend watching the brilliant Dr. Stephan Guyenet’s presentation “What Causes Leptin Resistance?” below.

I use “non-willpower intake regulation” to describe the ability to regulate our own dietary intake without having to use lots of willpower to avoid overeating. If we can master non-willpower intake regulation then in theory we should be able to eat at a suitable caloric intake to avoid fat gain, without feeling deprived or having to dig into reserves of willpower to ensure we stick to small, unsatisfying portions.

Based on what we’ve covered in this post it should be clear that when it comes to avoiding overeating without counting/tracking calories, there are two critical pieces to the puzzle:

In episode 50 of the podcast on caloric density I brought up the concepts of satiety and satiation.

In terms of understanding how to make a hypocaloric dieting phase as bearable and hunger-free as is possible, I HIGHLY recommend taking 15-20 minutes to listen to that episode.

But nevertheless, I’ll mention a few cliff notes that overlap with the context of this post.

As I bring up satiety and satiation, whilst commonly they are used interchangeably there is a difference:

Think of satiation as a best-guess of your future satiety by your body. It makes this estimate based on different sensory inputs like smell, taste, texture, and stomach distension (i.e. how much it expands/stretches). 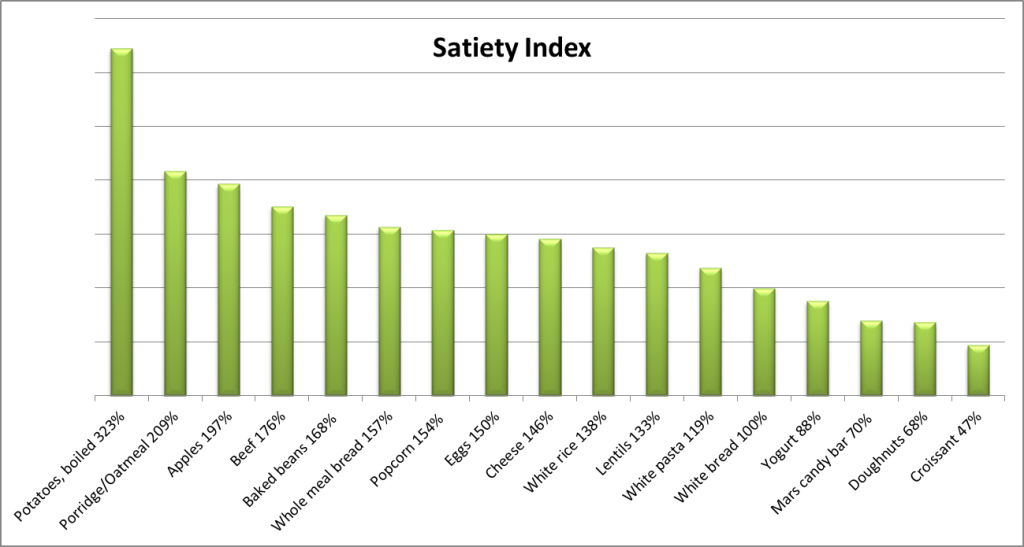 As you can see from the above graph, potatoes have an amazingly high satiety index. Hence why they’re such a great addition to meals.

At the other end of the scale, is it any wonder why people who start their day with pastries and jam are usually reaching for a snack perhaps only a mere hour later?

But let’s pull this back into some practical applications. What exactly can we take from all this to be able to maximise our ability to avoid the progressive fat gain over time that seems to be almost  expected these days?

In episode 50 I summarised the practical applications of all the satiety/satiation stuff with three big take-home messages:

Based on what has been discussed in this post in relation to leptin, ghrelin, gut hormones and energy homoeostasis, I would also add the following for you to consider:

So there you have it. Yet again it comes down to the fundamental blocks of health: overall diet, sleep and activity.