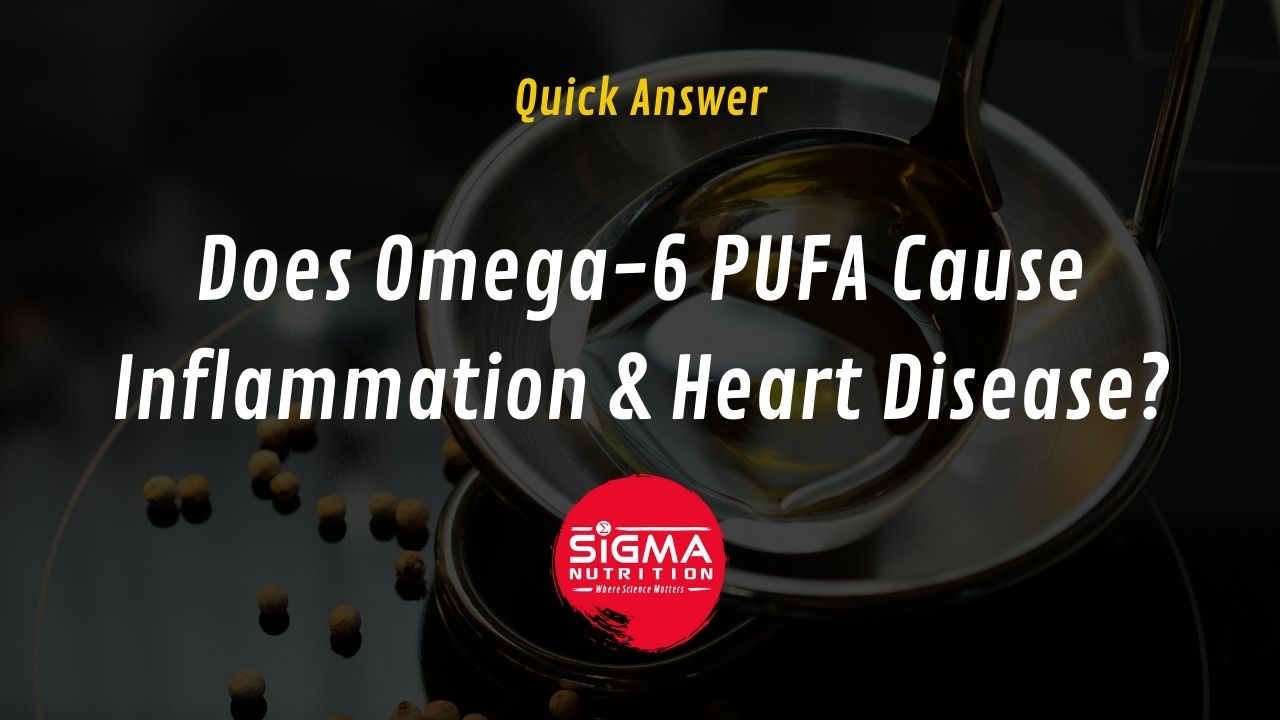 A common misconception in nutrition is the role of omega-6 PUFA and their relationship to inflammation, and CHD.
Let’s deal with inflammation first.

The theory that omega-6 PUFA are pro-inflammatory is based on a mechanistic fact that the omega-6 linoleic acid [LA] is a precursor to arachidonic acid [AA], and AA is the compound used to produce pro-inflammatory eicosanoids (eicosanoids can be thought of as hormones, but which act locally, not throughout the whole body. For example, when you twist an ankle the pain and swelling is localised to the ankle. Eicosanoids are important for the early stages of inflammation that we need after an injury).

How does this relate to heart disease?

A number of studies in the 1960’s-1970’s purported to find a negative effect of omega-6 PUFA on heart disease. The first, the Sydney Diet-Heart Study, was a small RCT in which in the intervention group were provided with a margarine spread to replace SFA with PUFA; there was a significant increase in CVD mortality in the intervention group. However, the margarine in the intervention contained high levels of trans-fatty acids [TFA], which we know now have a pronounced negative effect on health, to the point where they have been largely removed from the food supply. At the time, however, foods labelled as ‘high in omega-6’ often contained high levels of TFA. Much of the hyperbole surrounding margarines, and surrounding a negative effect of replacing SFA with PUFA, were generated by studies like the Sydney DIet Heart Study.

The other study which warrants mentioning here is the Minnesota Coronary Experiment, in which in-patients at psychiatric hospitals in Minnesota were randomised to an intervention replacing SFA with PUFA. Decreasing blood cholesterol levels was associated with a significant increase in all-cause mortality in participants over 65yrs, irrespective of diet group. The age group here is critical, as arguments made that lowering blood lipids increases risk for adverse health outcomes are uniformly made from data in the >65yrs age group, however, it is often that low cholesterol reflects poor health – or in the case of cancer, onset disease – in these populations.

Studies like the Sydney Diet Heart Study and Minnesota Coronary Experiment have re-emerged in the literature since 2010 (the year when the resurgant questioning over SFA and CVD/CHD began in earnest), and are cited as evidence that replacing SFA with omega-6 PUFA increases risk of CVD/CHD, a relationship which it is suggested is mediated by a pro-inflammatory effect of omega-6 PUFA. However, as outlined above, there is simply no evidence of any such pro-inflammatory effect in humans, while the findings of the trials are explainable based on their methodological shortcomings.

There is no evidence of increasing omega-6 PUFA consumption leads to increased inflammation, nor does increased omega-6 intake lead to increased heart disease risk. In fact, there is almost universal agreement between studies that have looked at substituing in PUFA in place of saturated fat in the diet, that such a change reduces heart disease risk significantly.