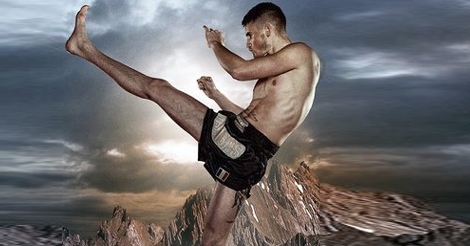 Below is Cian Cowley.

Cian’s a pro Muay Thai fighter and came to me about his nutrition early in 2014, through his strength and conditioning coach Jason Kane.

Now, a  few things to bear in mind: The guy is insanely talented. He was (and still is) on a winning streak and was already pretty damn lean.

However, after digging into what Cian had been doing nutritionally up to this point, we needed to implement some extremely important changes into his diet. He had been falling into some of the same traps a lot of fighters out there are falling into. Over the course of this four-post series, we’ll discuss what those traps are and the solutions to getting out of them.

But rather than simply discuss what Cian did specifically, I thought it would be more valuable to use his example as a way to frame a comprehensive run-down of what you need to know if you’re a serious combat athlete.

A Guide to Nutrition for Competitive Fighters

I wanted to do a no-holding-back, everything-in-the-open, complete run down of the principles that guide optimal nutrition programming for a competitive fighter (be it MMA, boxing, Muay Thai, kickboxing, etc.). I packed in a lot of information into this piece, so for the sake of space and convenience I have broken this into a 4-part series of posts. Even at that these can get pretty long.

The good thing though is that these four posts are ridiculously comprehensive.

There is no single dietary approach that will be perfect for everyone. I constantly find myself saying this at seminars. It really is all about individual context so I won’t even begin to get into everything that needs to be considered.

But what we can do is outline some of the fundamentals.

I want to outline the 3 foundations that need to be in place before a fighter starts looking at specifics: food quality, sufficient calories and sleep.

You need a diet that is going to:

The easiest way to think about this is to base most of your diet on whole foods:

For Cian, food quality was not an issue. He was already eating high-quality, whole foods. For Cian it wasn’t the quality of his food, it was the quantity; of both calories and carbohydrates.

Cian’s carbohydrate for chronically low for someone doing as much training as he was.

For athletes of combat sports a sufficiently high amount of carbohydrate-dense foods should be used to provide enough carbohydrate (I’ll go into much more detail on this “carb debate” in part II). These will be foods like potatoes, rice, pasta, quinoa, oats, butternut squash, bananas, etc.

One easy trap to fall into when fighters want to get leaner is to cut calories too much. This not only will leave you feeling tanked and unable to train 100%, it will compromise your recovery and training capacity.

Here’s the key to maximizing performance whilst dieting: Eat the maximum number of calories that allows you to still lose weight (at a rate of around 0.5-1.0 % of your bodyweight per week usually, depending on individual circumstances). In part II of the series we’ll go through how to work out your target caloric intake.

Here’s very crude and generic calculation to see if you’re close to an adequate calorie level:

[Note: this is only for competitive athletes with a high training load. An explanation of these calculations is given in part II]

While not a nutritional consideration this is probably just as, if not more, important.

If you’re running on 5 hours sleep a night, then even with the best nutrition in the world, you will still be unable to get anywhere near you best performance.

The concept of sleep being important for performance is not all that of a new one.

We train hard so we need to get proper rest in order to recover for the next session right? Well yeah, of course that’s true. But it turns out that sleep can have a much more direct impact on our performance.

Researchers at Stanford University studied the effect of sleep on five of the members of the college’s swimming teams. For the first two weeks of the study, the athletes kept up their usual sleeping patterns. For the next 6-7 weeks, they extended their sleep to 10 hours per night.

What happened to their performance?

That is a huge improvement in performance simply by getting better sleep.

There is so much to talk about with sleep but here are the basics:

Sleep in a Completely Blackened Room – Do not underestimate the importance of the word “completely” here. That means no lamps left on in the corner of the room, no nightlights, no digital clocks with bright LEDs, no light breaking through from the en-suite, no lights from any electronic devices, and so on.

Cool Bedroom – Improved sleep quality is achieved when body temperature is relatively stable. If the temperature in your room is too far above 18ºC your body will start to sweat in order to try to prevent overheating. So to prevent being woken up by this overheating response, keep your bedroom cool.

Winding-Down Period – It just makes good sense to “shut off” from the stresses of everyday life before you attempt to get your sleep on. It’s a guarantee that it’s going to take a hell of a lot longer for you to slip into some deep REM sleep if your still buzzing from the dramatic last scene from the Breaking Bad episode you just watched five minutes ago. Or if you are still irate from the rant you just went on about that idiot driving in front of you on the way home.

Instead, I suggest staying away from all screens and sources of blue light (yes, even your iPad), as well as any stressful situations (thinking about looming deadlines or appointments, for example), for at least 45 minutes before you plan to fall asleep. This number is quite arbitrary, so feel free to experiment with it, but I have found good success with a winding down period of in-and-around this mark. Go meditate instead.

Digestive Rest – Try to leave 1.5-2 hours between your final meal and going to sleep if you notice late night meals disrupt your sleep.

Summary: Shoot for between 7-9 hours (test what you feel best on) per night in a pitch black, cool room.

How do you know you’re getting enough? You should wake up feeling good. Feeling groggy on waking is not normal. It’s common but it’s not normal.

If a fighter does need to lose some body fat then a gradual fat loss nutrition plan needs to be put in place.

One ridiculous thing that is surprisingly common is the belief that during camp you just have to suck it up and get used to eating super low-carb meals of white meat/fish and broccoli constantly. I can’t think of a much WORSE diet than that for a fighter who is in the midst of an intensive training camp! The diet during those 6-8 weeks building up to the fight should be focused on proving adequate calories, carbs, protein, fat and micronutrients to support recovery and training performance.

We don’t want to be cutting down on calories and carbohydrates to the point that sparring performance is detrimentally impacted during this important training camp phase.

What does this mean?

If you have lots of body fat to lose, then lose the majority of it when you don’t have a fight coming soon. And by the time a fight is within 6-8 weeks, your nutrition should be focused more on providing the body with the nutrients it needs to train intensely and perform at your best during sparring, whilst only having to very gradually reduce body fat levels (if at all).

The more you’re diet is focused on rapid body fat reduction, the more inadequate your diet will be for supporting optimal performance in the gym. Always keep that in mind.

So, while this does mean that a fighter can gain some body fat between fights, it is blatantly obvious that staying within reasonable reach of fight weight year-round (something in the region of 5-10kg, depending on the individual. More on this in part 2) is a smart idea. Just look at what large fat gain between fights did to Ricky Hatton.

That constant large weight fluctuation throughout his career perhaps contributed to him being retired him a few years earlier than he could. This contrasts sharply with the “stay in shape” attitude of someone like Bernard Hopkins. The fact Hopkins could remain at the top for so long has of course a lot to do with the fact that he is ridiculously talented and just a genetic freak.

However, I think if he had gone through those “Hatton-esque” weight fluctuations, things would have turned out differently.

What body fat level should a fighter be at?

Obviously in a weight class-based sport like MMA/boxing/Muay Thai, being lean is important as it allows you maximise your strength-to-weight ratio. Excess body fat is problematic as it is taking up mass that could instead come from muscle tissue. Seeing as muscle has the obvious benefits of being able to generate force and store carbohydrates as glycogen, more muscle and less fat is good, d’uh! BUT…

Remember, less is not always better.

It is wrong to believe that “the leaner, the better”. Don’t fall into the trap of thinking the lower your body fat percentage the better. As with most things, there are problems at the extremes and there is a sweet-spot somewhere in the middle.

“What body fat percentage should I be at?”

This is going to vary from fighter to fighter depending on this like weight class, genetics and they specifically perform at different body fat percentages.

On average, most guys will probably perform at their best somewhere between 8-12%.

For some this might be at the lower end, while for others they may do better at 14-15%. The notable exception would be heavyweights who of course can go in with higher body fat percentages.

So if you’re at >14% BF, especially if you’re in the lower weight classes, then you could benefit from leaning out a bit. But if you’re 10% bodyfat should you aim to get to 5% bodyfat? No. You’re not a bodybuilder. Focus your nutrition on recovering and training optimally.

Next in this series:

PART II: How Fighters Should Eat For Fat Loss (without destroying training performance and health)

PART IV: How to Cut Weight For a Fight (Properly!)