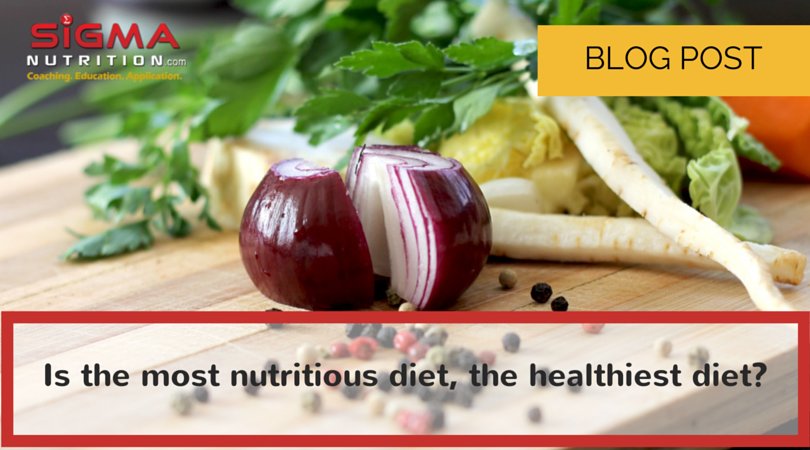 You know, I’ve been thinking an awful lot lately about the difference between the terms “most nutritious” and “most healthy”. When it comes to diet, are these simply synonyms or are they in fact completely different?

So the question is…

Is the diet comprised of the absolute “best” foods (i.e. most nutrient-dense or “nutritious”), in the correct amounts, necessarily the healthiest way to eat?

Seems like a bit of a silly question on first glance, right? But taking the time to delve into it reveals an awful lot more.

For a long time I was notorious for only focusing on biochemistry, nutrient metabolism and human physiology when it came to nutrition. Those were my sole methods of determining the “health” of a given diet or food. But that was flawed. It was flawed because that thought pattern has to act under the assumption that the only way in which our food choices affect our health is via their nutritive value.

But tahere’s a bigger picture here. Our health is a function of not only our nutrition, exercise and sleep, but also our psychology, social interaction and general happiness.

So what if eating the most nutritious diet is in fact different to eating the healthiest diet?

And by that I mean, for example, what if eating this way causes you to feel stressed over restricting yourself?

Causes you to miss social occasions and spend fun times with those closest to you?

Causes you to be obsessive over the ingredients in every single meal you eat?

Can we still call that diet “healthy”?

Dr. Janet Polivy from the University of Toronto summarised it well in her 1996 article in the Journal of the American Dietetic Association:

“A review of the literature and research on food restriction indicates that inhibiting food intake has consequences that may not have been anticipated by those attempting such restriction. Starvation and self-imposed dieting appear to result in eating binges once food is available and in psychological manifestations such as preoccupation with food and eating, increased emotional responsiveness and dysphoria, and distractibility. Caution is thus advisable in counseling clients to restrict their eating and diet to lose weight, as the negative sequelae may outweigh the benefits of restraining one’s eating. Instead, healthful, balanced eating without specific food restrictions should be recommended as a long-term strategy to avoid the perils of restrictive dieting. “J Am Diet Assoc. 1996; 96:589-592

Everything has a Trade-off

In pretty much every seminar or talk I’ve ever done, I’ve put up a slide with this message: I know that on a cellular health level it is better to have a salad as opposed to beer. But does that mean that that’s the overall healhtiest choice, all the time?

Will my health in the long-term be better if:

2) I allow myself to go out and party, have some beer, eat some ice cream, stay out late, etc. from time to time, and reap the health benefits that come from laughter, play, social interaction and having fun?

In each case there is a trade-off. The health benefit of the better quality nutrition vs. the health benefit of fun, enjoyment and relaxation. Which choice is the best one will come down to how heavily the answer weighs to one side or the other. Sometimes it will be for the latter, some for the former. Like I said, context-specific. You can’t validate drinking beer and eating crap all the time as healthy by claiming you’re relaxed and happy!

The whole point here is that we have to think beyond simply the nutritive value of our diets when we are selecting an approach or making individual decisions.

Your health is a function of many things in life. Nutrition is only one of those. Sure, it’s crucial. But don’t maximize it at the expense of other factors that play a role in a healthy life. Don’t let it cause you to miss out on great relationships with people or social interaction. Don’t let it cause you to become obsessive over extra single little detail so that you start freaking yourself out.

Taking care of your own health and paying attention to your lifestyle is majorly important. However, it’s almost never a good idea to be OCD about anything in life.

Finally, do not take this as me saying we all can just go eat what we want and that we’ll be healthy because we’re stressing over it. Please have some common sense. Most of the time eat good quality real food and then less frequently allow yourself to eat whatever the hell you like. How many more times can people keep saying the same logical idea before extremists get the idea? And that’s coming from a former extremist!

And that’s pretty much it. What do you think? Has there been occasions where you restricted yourself where looking back now, you regret doing so? Or on the other end, was there a time when you were “too relaxed”? Let me know in the comments…

You can support this work by donating either a one-time tip or on a recurring basis. Click here to donate!