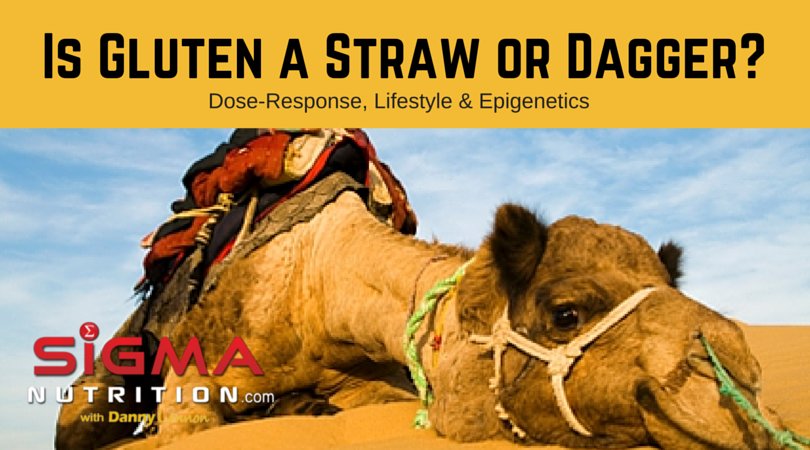 As I’ve mentioned previously (here), unfortunately when it comes to gluten the rate of dogmatic fantasy tales you can read online vastly out-weighs the evidence.

It appears that gluten shouldn’t be a major problem for the vast majority of the population (anywhere between 87% to 99% based on currently available reserach).

In the cases of accepted conditions with a clear clinical diagnosis, like both coeliac disease and wheat allergy, complete removal of gluten from the diet is warranted.

However, when we get to the debated issue of non-coeliac gluten sensitivity (NCGS) things start to get a little bit more hypothetical.

A consensus on either the exact classification or a standardised clinical diagnosis have yet to be determined. Also remember we’re talking about something very different to coeliac disease, where we see clear destruction of intestinal tissue.

So because of the lack of clarity on NCGS right now, that leaves lots of room for potential questions. A couple of which I want to raise in this post.

I’d be interested to discover whether NCGS exists in a ‘black-and-white’, ‘all-or-nothing’ state like coeliac, where even “a little” gluten is bad.

Or is there a threshold that needs to be reached? Or perhaps it exists along a dose-response spectrum?

In other words, rather than experiencing a detrimental impact from even a small exposure to gluten (as a coeliac sufferer would) is it possible that someone could be “gluten sensitive” but will only experience negative symptoms at a certain intake?

Let me indulge myself in throwing some hypotheticals around the place…

Gluten-free foods are required to have a gluten content no more than 20 ppm (parts per million).

However, at least when it comes to coeliac patients,  “the total amount of gluten ingested, as opposed to the concentration of gluten in individual food products, is the key factor associated with histologic abnormalities in the small intestine.”

Various studies have attempted to determine how much gluten a coeliac patient can actually safely consume. Different studies have found adverse effects at intakes from 100 mg, all the way down to 10 mg per day. And consumption of gluten at levels of 200 mg/ day or more “was definitely associated with the development of intestinal abnormalities”.

So to be safe, coeliac patients are probably looking at ideally keeping gluten intake below 10 mg/d. Although it’s almost certain there is individual variation to this.

As a comparison, 2 slices of bread would contain about 5,000 mg (5 g) of gluten. Hence why even a  few breadcrumbs on a knife used to prepare a meal is enough to be a major issue for someone with coeliac disease.

But how does this all-or-nothing requirement translate to those without an autoimmune component to their gluten sensitivity?

Remember, gluten elicits a release of zonulin (and hence an increase in intestinal permeability) regardless of the presence of an autoimmune mechanism or not, thus allowing gluten fragments to slip into the bloodstream where they can cause an immune response.

You Can Probably Deal With It

For most people it seems they can “clean up” this gluten invasion into the bloodstream without much fuss. The cells of the gut also turn over pretty rapidly. Plus the level of intestinal permeability never reaches the level of permeability seen in coeliac disease tissues.

So the net effect is probably ‘no big deal’.

I think some people massively underestimate just how adept our bodies are at dealing with small amounts of potentially problematic compounds.

There are vast numbers of compounds in foods we can point to as “toxic” or problematic but yet we don’t fear them. Oxalic acid in your spinach for example can bind up minerals and prevent their absorption.

But this shouldn’t be seen as a problem. Not only is there so many counter-acting benefits to spinach but the amounts of oxalic acid you could consume from a typical serving is so small it’s not going to cause any mineral deficiencies.

However, if we think of a hypothetical situation where someone blends up pounds and pounds of raw spinach and drinks it all day, every day, could the oxalates be an issue?

While that’s obviously a ridiculous scenario, if we bring this back to gluten, does the dose-response and frequency of ingestion now seem to be something worth considering?

Could some people reach a point where the regular “high” gluten intakes that are occurring chronically on a typical Western diet actually start to become an issue?

Could someone reach a point where they can’t effectively deal with it?

We certainly can find people who report that they don’t feel any negative response if they have small intakes of gluten, perhaps from trace amounts in certain dishes or croutons on a salad, but yet are adversely affected by eating a few wheat-based meals during the day.

But as pointed out in the last post, those anecdotal reports could be for a number of reasons.

So yeah, I don’t know but it makes sense. Not that something “making sense” counts for anything in science.

On a slightly related note, if we do have someone who is “gluten sensitive” then is this a set genetic destiny or is it influenced epigenetically via life experiences and lifestyle?

Is Gluten a Straw or Dagger?

Rather than thinking of gluten as a dagger that gets plunged straight though the heart of your good health any time you inhale a breadcrumb, is it more accurate to think of it as the straw that breaks the camels back?

I’m really saying, does how you live your life and non-genetic factors influence your ability to tolerate gluten or potentially contribute to the development of a sensitivity?

As an extreme example let’s imagine a person is born in two parallel universes. Same genetics but the events of his life following birth are completely different. Is it conceivable that someone can be much more likely to suffer from a gluten exposure if: they have a crappy diet, poor sleep, low vitamin D, impaired gut lining, decimated gut microbiome due to antibiotic use and formula feeding, are obese, are constantly stressed out all the time AND have a genetic weakness somewhere to boot?

What about on the flipside; by doing everything “right” with regards to those lifestyle choices, could that prevent gluten from being the same issue it could potentially be or the development of a sensitivity?

Maybe not but I think it’s a hypothetical worth considering.

First, I’m not saying all (or any) of these factors directly influence your ability to tolerate gluten. And second, yes I realise this is a very extreme comparision.

But the purpose of the comparison is simply to get us thinking.

If it’s as simple as ‘you can either tolerate gluten or you can’t’ then none of this stuff would matter.

I don’t think it’s beyond the realms of possibility that the integrity of the gut barrier and the make-up of the gut microbiome will eventually be shown to be major determinants of gluten sensitivity. And there is already some early research hinting at that.

Although, I’m not going to dare go down that rabbit hole right now.

In the next post I’m going to try to address the question “is there a benefit to consuming gluten?”

You can support this work by donating either a one-time tip or on a recurring basis. Click here to donate!